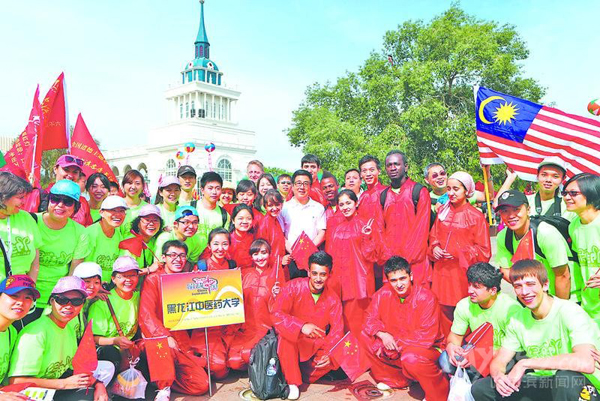 Hikers from around the world pose for a photo after the opening ceremony.

Nearly 40,000 residents of Harbin and hiking enthusiasts from 11 countries took part in a hiking contest on June 10, the first day of the Chinese Dragon Boat Festival, as part of the 2013 Charming Harbin Summer cultural tourism activities.

Lin Duo, secretary of Harbin municipal Party committee, fired the starting gun for the contest, which featured a route stretching about 20 kilometers, and Qu Lei and other city leaders also attended the opening ceremony.

The contest has been held every year since 2003, and domestic media such as Xinhua News Agency, CCTV, Sina, Sohu and Tencent all covered this year’s event.

Lu Hong, secretary-general of the World Walking Association (WWA), and a councilman also attended the opening ceremony, and they said they hope this event would inspire people to take part in hiking activities.

This year’s contest also focused on raising awareness about environmental protection and organizers called on residents to protect the city’s environment.