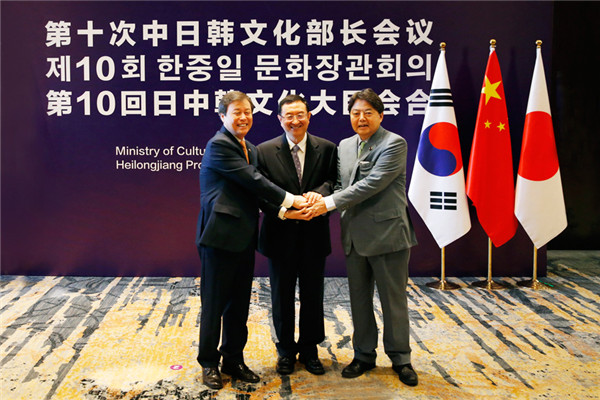 Culture ministers Do Jong-whan of the Republic of Korea, Luo Shugang of China and Yoshimasa Hayashi of Japan (from left to right) shake hands at the 10th China-Japan-ROK Cultural Ministers' Meeting held in Harbin, Heilongjiang province, Aug 30, 2018. [Photo by Guan Yali/for chinadaily.com.cn]

At the meeting, the three sides also went over the progress made since their ninth meeting held in Kyoto, Japan, last year.

"Culture ministers of the three nations have met every year to promote cultural cooperation in Northeast Asia since the first meeting took place in Nantong, China, in 2007," said Luo. "Under the meeting mechanism, we three sides have conducted effective cooperation to enhance understanding, deepen trust and promote friendship."

Luo also mentioned the success of the Pyeongchang Winter Games.

"It is the first in a series of three global sporting events in Northeast Asia. Then we will welcome the 2020 Tokyo Olympics and the 2022 Beijing Winter Olympic Games," he said. "We hope to strengthen cultural exchanges and cooperation in the Olympic Games with Japan and South Korea."