Leading Swiss violinist and conductor Robert Bokol, came to the hospital’s acupuncture department on April 12 especially to try out acupuncture before giving a performance later in the city.

The Chinese traditional medical treatment of acupuncture -- involving piercing the body with a needle -- is a treatment that focuses on the inside from the outside. It is a therapy that seeks to find acupoints as a means of clinical diagnosis, to find the cause of illness and then take the appropriate treatment.

Acupuncture is a skill based on traditional Chinese medical theory, similar to massage and another home-grown physical therapy involving scraping the skin called Gua Sha. They all use different ways to heal, harnessing a mechanism based on the theory of life energy and blood. Acupuncture stimulates points of life energy and blood, in order to keep the yin-yang balance and adjust the status of the organs.

The violinist told the doctor that while he was not suffering from any illness, he had heard that acupuncture was of great benefit for soothing fatigue and stress. Robert Bokol, leading violinist and conductor from Switzerland, tries out acupuncture at the First Harbin Hospital on the afternoon of April 12. [Photo/Chinanews.com]

Based on his health conditions, acupuncture department director Huang Qiuxian conducted acupuncture and acupoint conditioning for Robert. After half an hour, the symptoms of his discomfort were significantly alleviated; and he could not help but give a delighted thumbs up for the director and praised the wonderful effects of the therapy.

Acupuncture is very popular among the Chinese for its low cost, satisfactory curative actions and mild side effects, Huang said.

It is estimated that acupuncture has developed over two and half thousand years and for much of that time, it was used for internal medicine, surgery, gynecology and pediatrics. These days with the fast-paced life of the modern world, it serves more to help relieve the pressures of work and stress.

Acupuncture continues to evolve with Chinese culture and is believed to contain the spirit of China. Meanwhile, it has been recognized as a masterpiece of the intangible heritage of mankind. 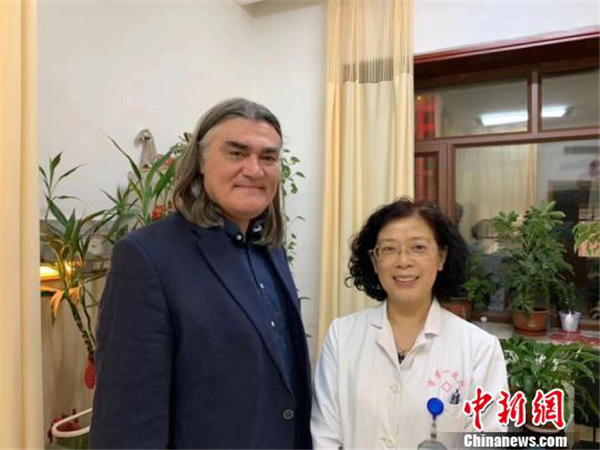 Robert Bokol (L) and Huang Qiuxian (R), director of the acupuncture department of the First Harbin Hospital, meet for a consultation before treatment. [Photo/chinanews.com]