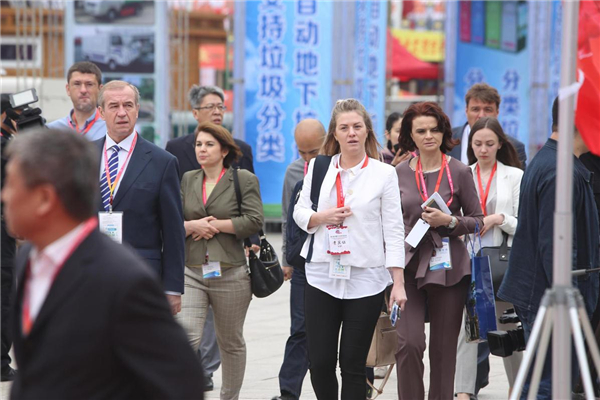 When addressing the opening ceremony of the second China-Russia local cooperation forum Saturday morning, Wang said the Exposition and the Forum are of important significance, as this year marks the 70th anniversary of the establishment of diplomatic ties between the two countries and the two heads of state recently agreed to develop the comprehensive strategic partnership of coordination for a new era.

The relationship has gone through an extraordinary process of 70 years and enjoys the highest level of mutual trust, coordination and strategic value among the ties between major countries, said Wang.

"We should strengthen the guidance to release the effectiveness of local cooperation platforms and actively promote the synergy between the Belt and Road Initiative and the Eurasian Economic Union, in accordance with the important consensus of the two heads of state," he said.

Russian Deputy Prime Minister Maxim Akimov said at the opening ceremony of the forum that although bilateral local cooperation has achieved remarkable results, it still has great potential. The Russian side is willing to constructively expand new areas within various local cooperation mechanisms to realize new progress with the times.

Earlier Saturday morning, Wang and Akimov together visited the Russia pavilion at the exposition.

Akimov said the Russian side is ready to expand cooperation on economy, trade, agriculture, energy resources and new technology, in accordance with the cooperation goals set by the two heads of state.