The three areas will deepen cooperation in technology and intellectual property creation, operation, protection and trade in the international arena, according to the agreement, which was signed on Aug 18 in Harbin, the capital city of Northeast China's Heilongjiang province.

"The three areas can utilize and complement each other's advantages to establish a hub to cooperate with Russia and the Northeast Asia region," said Ren Hailong, deputy director of the administrative committee of the Harbin area of the FTZ.

Approved as a pilot FTZ in 2019 by the State Council, the Heilongjiang FTZ is the northernmost of its kind in China and has witnessed rapid development in short time of operation.

The 119.85-square-kilometers FTZ was established in a bid to build a hub for promoting cooperation among China, Russia and Northeast Asia.

A major part of the FTZ, the Harbin area spans 79.86 sq km and has taken a leading role in institutional innovation, achieving progress in its business environment, industrial construction, foreign trade and regional cooperation.

Over the past two years, the Harbin area has launched 51 innovative institutions and of them, four initiatives in the creation and IP have been listed as top institutional innovations by the Ministry of Commerce.

To promote its business environment, the area has cooperated with three industrial parks and nine banks to establish channels for administrative services. According to officials of the area, 99.44 percent of its 1,069 services can be accessed online.

In addition, the Harbin area has set up courts and procuratorates, and has introduced businesses handling departments for Harbin's trade arbitration and Heilongjiang's IP matters.

The area's legal team is cooperating with 20 law firms in Heilongjiang province and nearly 700 attorneys, to support the construction of a properly regulated business environment. 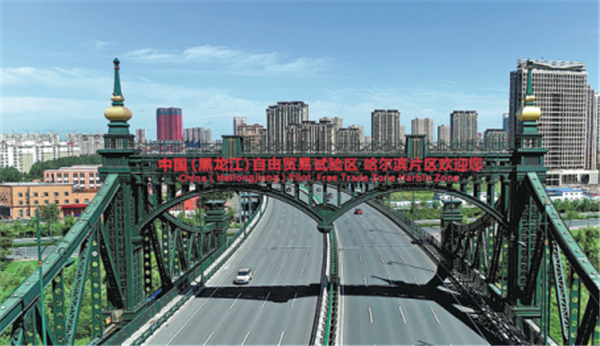 The Harbin area of the China (Heilongjiang) Pilot Free Trade Zone is a major part in the FTZ. CHINA DAILY
The area administration has planned its industrial layout by building centers featuring science and technology innovation, finance, trade, exhibition and cultural tourism as well as constructing a hub for emerging industries.

It has also been planned to accelerate the building of industrial parks including a joint venture between Shenzhen and Harbin. The Harbin area of the FTZ has established an integrated system for attracting and serving businesses, and launched platforms to attract businesses and investment online.

To date, the area's administration has signed 58 projects, with an agreed investment of 219.9 billion yuan ($33.9 billion). Of these, it has incorporated nine programs each valued at over 10 billion yuan and contributed $120 million in actually utilized foreign capital.

Strong policy support has helped to unleash market vitality. The area's administration said it is dedicated to providing businesses with preferential policies that can compete with those in other FTZs.

Over the past two years, it has rolled out a series of policies, incentives and guidelines to support companies going public. By the end of May, the area had attracted 7,732 businesses.

By cooperating with its Russian peers, the Harbin area seeks rapid development in its open economy, local officials said.

The area has attracted projects such as the China-Russia Industrial Park, a Sino-Russian import and export agricultural products trading center and a base for commercializing scientific research between the two countries. It has also opened business attraction offices in Russia, Japan and South Korea.

The area will strengthen the cooperation with Heihe and Suifenhe to create a common FTZ group and promote collaboration in cross-border processing, local officials said. The Harbin area of the Heilongjiang FTZ boasts a group of industries. YIN CHENGYING/FOR CHINA DAILY