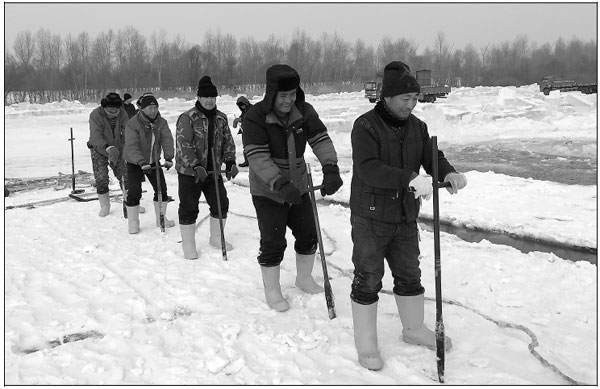 Wang Yandong (second from right) and his team separate ice blocks with iron rods from the Songhua River, Heilongjiang province. Over the past eight years, Wang has spent 15 days during the coldest part of winter cutting ice from the river. [Photo by Zhou Huiying/China Daily]

In mid-December, the temperature drops to nearly - 30 degrees C in Harbin, the capital city of Northeast China's Heilongjiang province.

At 3 am, the coldest part of the day that time of year, 42-year-old Wang Yandong always leaves his home in Tongfa village in Zhaodong, 30 km from Harbin.

Over the past eight years, Wang has spent 15 days during the coldest part of winter cutting blocks of ice from the frozen Songhua River. The blocks are then transported to the parks and roadsides where artists carve them into various sculptures to transform the city into a winter wonderland during the Harbin Ice and Snow World event.

"I have to get up at about 2 am and leave home after a simple breakfast," Wang said. "However, we are luckier than before because one of us who owns an eight-seat minivan can drive us to Harbin. In the past, we could only take a truck."

Wang's team has nine members, all from the same village. They have worked together for more than five years and work well with each other.

Usually they spend one hour on the road and begin to work at 4 or 5 am with the help of lamplight from the tall building across the river.

"They always laughingly call me 'captain'," said Wang. "I know it is because I have been in this line of work for the longest time."
In fact, Wang is an expert in ice cutting.

He is familiar with the situation of the frozen river and good at assigning tasks based on different strengths and talents of his team members.

"It is not so simple work, as you see. You have to be strong, quick and skillful," Wang told China Daily, "Most important, you should finish the task together with the whole team."

According to the ice engraving rules, each block of ice must be about 80 cm wide, 40 cm thick and 160 cm long.

"It will be not suitable for ice engraving if the ice is too thick or too thin," Wang said.

First, the team needs to locate the right place near the riverbank, where the ice is about 40 cm thick.

Then the crew uses a chain saw to cut the ice blocks into the required size.

"It is skillful work to cut the ice," Wang said.

After cutting, a worker uses an iron rod to make the block loose, and four workers attach it to hooks and then use a towline to lift the slab onto the bank.

"Each block weighs about 400 kg. So it is important to save energy by pulling them onto the bank the right way," Wang said. "It's so lucky that my team members can cooperate with each other so well."

At last, the ice is taken to the buyer's truck. 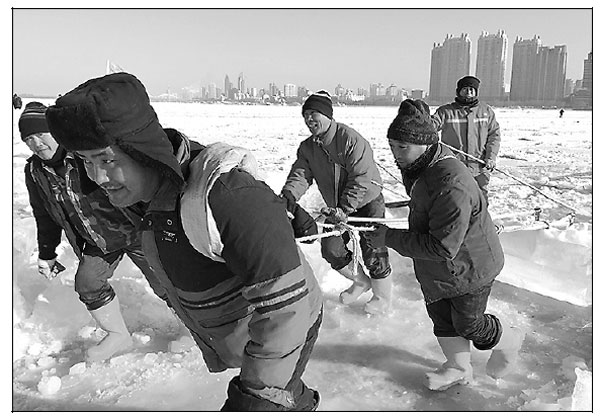 "Some villagers do odd jobs in Harbin or in the surrounding area when winter comes," Wang said. "But as far as I know, they earn less than 3,000 yuan a month."

However, he said, "the ice-cutting job can provide me more than 4,000 yuan after only half a month's work," he said.

Wang and his family farm a half-hectare plot in his village, which bring them about 10,000 yuan a year.

"I hope I can make better life for my family with some extra income through my hard work." Wang told China Daily.

Standing on the frozen Songhua River, the nippy river wind can easily blow through people's cotton-padded jackets or even through down jackets.

To protect themselves from cold, they all wear thick jackets and waterproof boots.

"However, after a whole day's work, the jackets and boots get wet with sweat and ice-cold," Wang said.

This year, the 16th Harbin Ice and Snow World festival, which opened for trial operation on Dec 22, needed about 180,000 cubic meters if ice.

The intense schedule poses a special challenge to workers like Wang.

"Every day, we spend only 20 minutes to have lunch in the minivan," Wang said. "Usually we bring some pancakes, sausages and instant noodles from home. It saves both time and money."

"To keep yourself safe is of prime importance for this job," Wang always tells his partners.

"First, don't go to the middle of the river because torrential water under the thin ice is dangerous. And the worker with the saw must cut right to ensure the safety of himself and the other workers," he said.

But he also said he has never heard of any accident over the past eight years.

"Everybody knows the importance of being safe, and there are also some safety officers patrolling around the work zone," Wang told China Daily.

Wang told China Daily that he can't afford the 300-yuan ticket to enter the theme park where the ice that he and his team gathers is carved into elegant structures.

"Last year I had a chance to enter the park with the truck loading the ice blocks," said Wang, "It wasn't finished yet, but the spectacular scenes shocked me. I hope I can bring my little daughter to have fun in the park, but 300 yuan per ticket is really expensive for me."