The Harbin-Mudanjiang High-Speed Railway, one of the key projects included in Northeast China's fast passenger transportation network, has now been in service for one year, according to rail officials.

The 293-kilometer line links Harbin, the provincial capital of Northeast China’s Heilongjiang province, with Mudanjiang, a city on the Russian border in Heilongjiang. It traverses the grand Songnei Plain to the hilly Changbai Mountain area, where temperature drops to as low as -40 C in winters and hits highs of 30 C in the summer.

Since the line opened on Dec 25, 2018, over 20,000 trains have run, with an operating mileage of 5 million kilometers. It has handled around 7.7 million passengers, with an average passenger flow of about 20,000 person per day.

During the summer holiday in 2019 alone, the railway handled 1.65 million passengers, which dramatically relieved the pressure of passenger outflows in Heilongjiang province.

Over the past one-year period, it has also withstood snowstorms, heavy rain, strong winds and extreme cold and proved to be safe and reliable, rail officials said.

It only carries passengers and is designed for speeds of around 250 km per hour. Thanks to the line, the journey time between Harbin and Mudanjiang is now only takes around 1 hour and 28 minutes, down from the previous 4 and a half hours.

Currently, there are 31 pairs of trains running on the railway per day, increasing from the 19.5 pairs at the initial operational phase. Officials said the shortest departure interval is around 26 minutes.

Passengers are able to travel among the major cities in Heilongjiang, such as Harbin, Qiqihar, Daqing, Mudanjiang and Jiamusi, within two hours.

In addition, the Harbin-Mudanjiang High-speedway Railway serves as an important ice and snow tourism line as it passes through Heilongjiang’s popular scenic areas, such as Yabuli Ski Resort, China’s Snow Town and Weihu Mountain Studio City.

Officials said it also links to the Harbin-Dalian High-speed Railway in the southwest. The service ensures that Heilongjiang’s high-speed railways are connected to the Northeast China's fast passenger transportation network, making them a fast track connecting Heilongjiang with large and medium cities outside the province, which greatly promotes the flow of logistics, people and information. 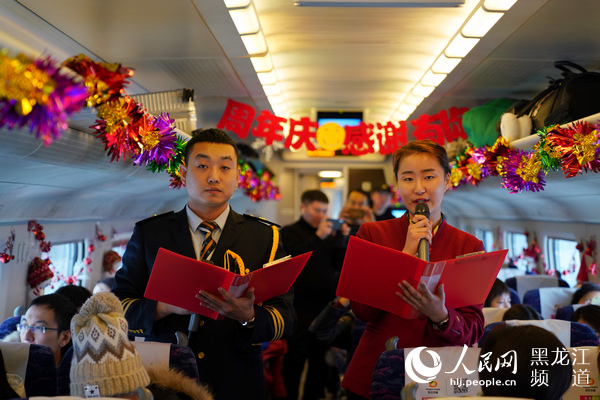 A celebration marking the first anniversary of the operation of the Harbin-Mudanjiang High-speed Railway is held on a train on Dec 25. [Photo/people.cn] 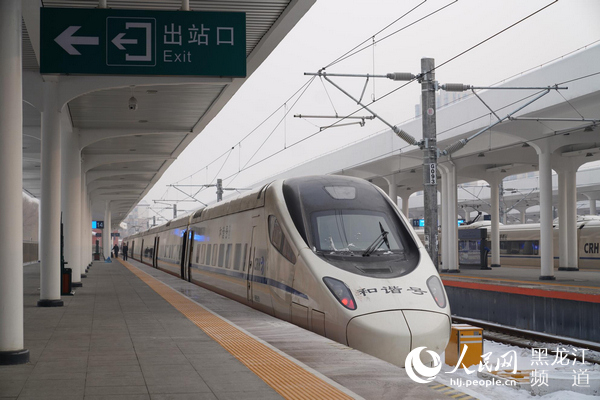 A train on the Harbin-Mudanjiang High-speed Railway loads passengers at Harbin Railway Station on Dec 25. [Photo/people.cn] 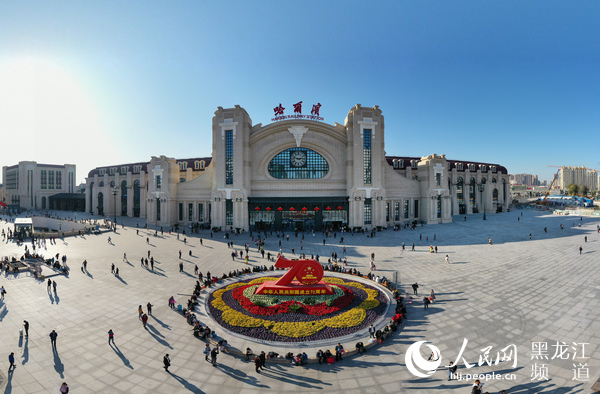 Harbin Railway Station is a main terminal for trains running on the Harbin-Mudanjiang High-speed Railway. [Photo/people.cn]