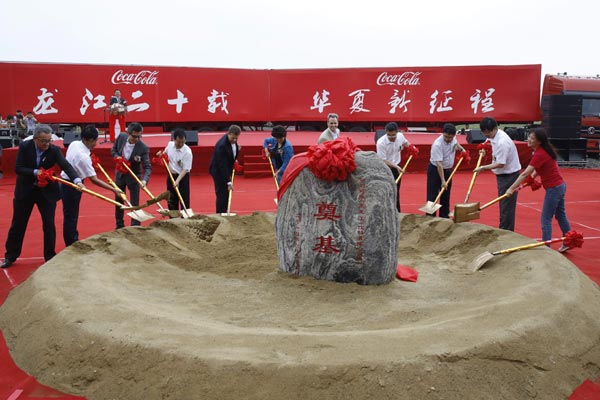 Coca-Cola officially kicked off its new green plant construction in South Harbin Industrial City on Thursday. The plant represents a $100 million investment and is part of the three-year, $4 billion investment plan in 2012-2014 that underscores the Coca-Cola Company's confidence in and commitment to China.

Coca-Cola established its first plant in Heilongjiang in the Harbin Economic-Technological Development Zone in 1994. The new plant is part of the redevelopment plans and will be located in the New South Harbin Industrial City. With strong business growth in the northeast region, there is a need to increase capacity to fulfill the fast increasing local consumer needs.

The 200,000 square meter plant is designed to accommodate nine production lines for both sparkling and still beverages, including Coca-Cola, Sprite, Fanta, Minute Maid and Ice Dew.

Upon completion, the total investment is expected to deliver an annual production capacity of 1.2 million tons of beverages. The first phase of the new plant will be operational in 2016. At that time, the existing Heilongjiang plant will be relocated to the new site together with its operation and management team.

Deputy Mayor Qu Lei congratulated Coca-Cola on the groundbreaking of the new plant.

"Coca-Cola has been one of the very first international companies in Heilongjiang, and contributed a lot to local economic development. We strongly believe its new plant will bring positive influence to Heilongjiang and the New South Harbin Industrial City, with its leading role in the industry. The green plant philosophy of Coca-Cola will also set an example for the green economy development," he said.

"Thanks to the tremendous support from the provincial, municipal and district governments, our Heilongjiang plant has become an integral part of our business in China, having played an economic and social role for more than 20 years since its establishment in 1994," said Glen Walter, CEO of Coca-Cola BIG China.

"With the state-of-the-art technologies, this new plant is a testimony of the Coca-Cola green philosophy and will become a modern and environment-friendly model for Coca-Cola in Asia."

Martin Jansen, Regional Director for China & Southeast Asia of Coca-Cola Bottling Investments Group, said, "China is an important growth market and growth engine for the Coca-Cola system, and is currently the third largest market globally. This project reiterates our long-term commitment and confidence in the Heilongjiang province."

Coca-Cola (Heilongjiang) Beverage Co Ltd has achieved long-term development in the past 20 years with its establishment in the Harbin Economic-Technological Development Zone.

Providing quality and safe products to consumers, Coca-Cola Heilongjiang plant has always been committed to operating in a sustainable way, promoting energy-efficiency, low-carbon and green operations, and has played an active role in supporting and driving various social and charity causes.

"We value the community and have built three Project Hope Schools to help children from underprivileged families to continue with their education, and improve their living and learning conditions."

Along with the redevelopment plans, Coca-Cola will continue to strengthen its brands, invest in infrastructure and drive community initiatives, according to Guo.