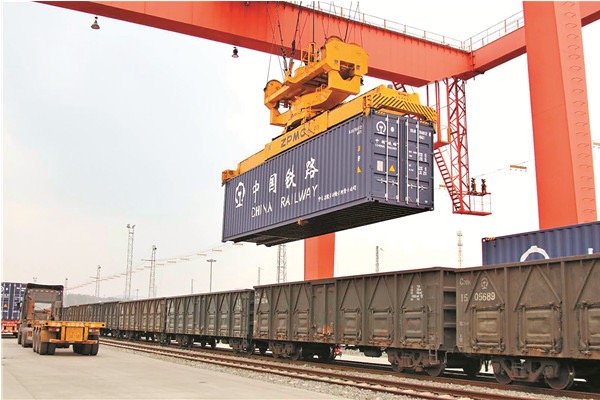 A freight train carries cargoes at Harbin South Railway Station in Harbin, capital city of Heilongjiang province, on May 4. [Photo/MY399.COM]

The operation of the freight train marks the launch of a freight train service linking Heilongjiang’s wood and grain producers to the nearest seaport.

Officials said the service aims to solve the logistics barriers caused by the prevention and control measures carried out since the outbreak of the novel coronavirus epidemic.

The freight train operates every Monday and Thursday.

Wood and grain produced in Suifenhe, Suihua and Zhaodong cities will be gathered at Harbin South Railway Station and then transported to Yingkou Port.

An official from the Harbin bureau of China Railway said that the total transportation time for the cargo from its point of origin to the port would not exceed 15 days.

The products will further be transported to their final destination in South China’s Guangdong province via ships.

Harbin railway officials said that the latest in 40-foot containers are being used to transport the products.

It is estimated that more than 15,000 tons of wood and other goods will be sent every month, a volume which is expected to effectively reduce the logistics costs of companies.

Suifenhe Aote Trading Co Ltd is one of the first companies to benefit from the service.

"During the epidemic, the road transportation time was not stable and it was difficult for us to fulfill customer orders on time,” said Zang Wenlong, manager of the Suifenhe trading company.

“Now that the train has opened, the order pressure on our company has eased,” Zang added.