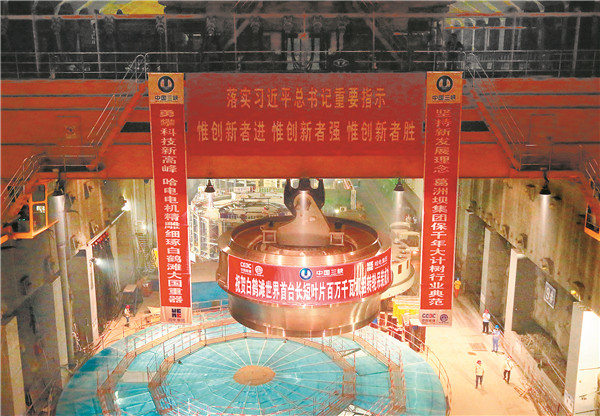 The runner of the world’s first 1,000-mW hydrogenerator set with long and short combined blades is successfully installed at Baihetan Hydropower Station on July 22. [Photo/MY399.COM]

The world’s first 1,000 megawatt hydrogenerator -- designed and manufactured by Harbin Electrical Machinery Co, was successfully installed on July 22 at the massive 16 gigawatt Baihetan Hydropower Station -- under construction on the Jinsha River, which is a tributary of the Yangtze River in southwestern China.

The generator made by the company, based in the capital city of China’s northernmost Heilongjiang province, has a diameter of 8.87 meters and a height of 3.79 m, weighing 338 metric tons.

Officials said that the successful installation of the equipment marked the construction of the Baihetan Hydropower Station entering a new stage.

The Baihetan power station, will be the world’s second biggest after the Three Gorges Dam in terms of total installed capacity when construction is finished.

With installed capacity based on 16 1,000-mW generators, the project is expected to generate more than 60 billion kW hours of electricity per year.

Harbin Electrical Machinery Co, a pioneer generator producer founded in 1951, was chosen as the producer of eight 1,000-mW generators and accessories for Baihetan Hydropower Station.

Harbin has made major progress in improving its environment.