A freight train carrying 312 metric tons of Russian sweets arrived in Xinxiangfang Railway Station in Harbin, the capital city of China’s northernmost Heilongjiang province, on Feb 14.
The train embarked from Moscow in Russia and traveled for 14 days and 9,600 kilometers before finally arriving at its destination in Harbin.

Compared with other cross-border freight trains in operation, the newly-opened Moscow-Harbin freight train operates under a fixed train number and fixed timetables, routes, stops and transportation prices. It enters China through Heilongjiang’s Suifenhe port, which shares a border with Russia in the north.
Using the train route as a shipping method shortens the transportation time between Moscow and Harbin by more than 30 days and reduces logistics costs by about 30 percent. 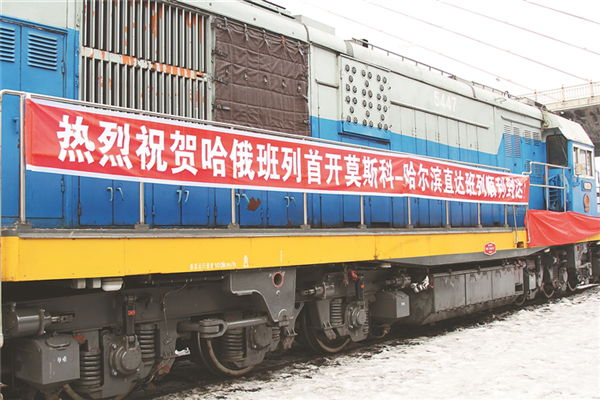 In the next three months, normalized freight train operations between Harbin and Moscow will be realized at least once a week.

Harbin Russian Express Operation Co will operate the trains. The company has nine branches in Russia and more than 100 Russian employees. It is currently the only Chinese-funded transportation company with railway carrier qualifications in Russia.