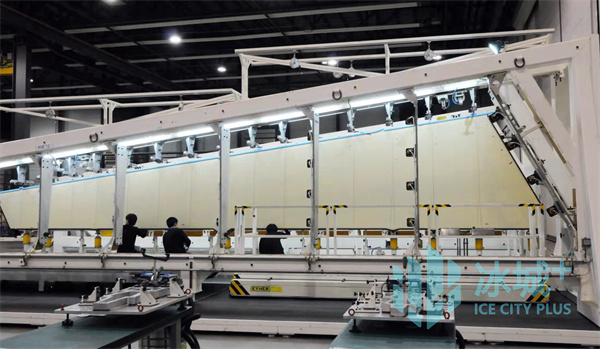 An aviation products production line swings into action in Pingfang district. [Photo/Ice City Plus]
The scale of the aviation industry in the Pingfang district of Harbin, capital city of China's northernmost Heilongjiang province, reportedly topped 40 billion yuan ($6 billion) in 2021 – double that at the end of the 12th Five-Year Plan period (2016-20).

Last year, the district welcomed seven new businesses above a designated size – those with annual sales of 20 million yuan ($3.1 million) or more – bringing the total number of such resident enterprises to 30.

In 2021, the total annual output value of aviation companies above a designated size in Pingfang increased by 34 percent year-on-year, for an average gain of more than 30 percent over two consecutive years.

Meanwhile, the development plan for Pingfang's aviation industry during the 14th Five-year Plan period was recently rolled out.

Currently, Pingfang has nearly 30 aviation industry projects, with a planned total investment of about 2 billion yuan.

In 2022, plans are to build new R&D buildings, production workshops and other scientific research and capacity expansion projects for resident enterprises.

In addition, short-distance flight routes connecting Harbin to Wudalianchi and Arun Banner are expected to be opened this year.