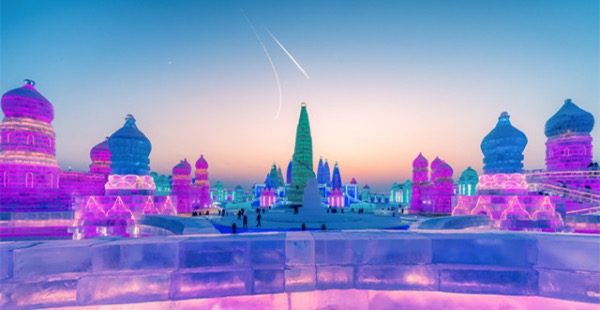 Ice buildings are wonderfully illuminated by colorful lights in Harbin Ice and Snow World [Photo by Liu Yang for chinadaily.com.cn]

Originating from the Ice Lantern Show in 1985, the Harbin International Ice and Snow Festival – in Harbin, capital city of China’s northernmost province of Heilongjiang – has become one of the world's four biggest ice and snow festivals, along with the Sapporo Snow Festival in Japan, the Quebec Winter Carnival in Canada and Norway's Ski Festival.

The organizers say the Harbin International Ice and Snow Festival is the longest-lasting ice and snow festival in the world. It only has an opening ceremony on January 5 each year and there is no closing ceremony.

During the event, there are four important festivals: the New Year’s Day Festival), the Chinese Spring Festival, the Lantern Festival and the China.Heilongjiang Ski Festival. Brave winter swimmers jump into the icy water of the Songhua River in Harbin on Jan 5, 2019. [Photo by Liu Yang for chinadaily.com.cn]
Activities during the festival feature ice and snow sculpture competitions, ice lantern admiring, snowman making, as well as a rich entertainment program on ice and snow.