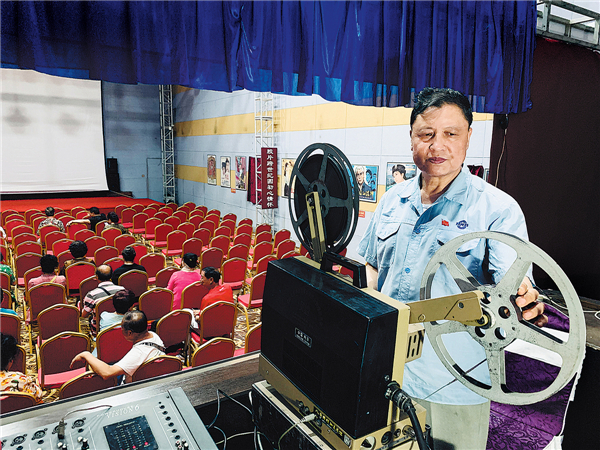 You Haijun prepares to screen an old movie at a private museum in Harbin, Heilongjiang province. [Photo by Zhou Huiying/for China Daily]

Retiree shows vintage movies for free in his own private cinema.

As an old bell rang in You Haijun's screening room, the lights dimmed and the movie began to play.

Unlike screening rooms in modern movie theaters, You's theater is decorated with vintage posters, and an old film projector plays the film on a curtain screen, taking audiences back to decades gone by.

The 67-year-old, a retired administrative worker at a State-owned factory in Harbin, capital of Heilongjiang province, started his private cinema in May 2018.

"Xie Jun, the curator of a private museum, provided me with a 500-square-meter room," You said. "It has 200 seats and has become the defining part of the museum, especially for visitors who want to immerse themselves in the olden days."

After making a booking in advance, audiences can enjoy screenings for free.

"There are a few volunteers helping me run the theater, and most of them are retirees as well," he said. "So we can only receive groups due to our limited time and energy."

Visitors can choose from more than 1,000 old movies produced during the previous century.

You's enthusiasm for vintage films dates back to 1972, when he became a worker at the manufacturing base of a local factory after graduating from senior high school.

"I was assigned to screen outdoor movies for workers every weekend," he said. "The base was quite far from the city center, so watching movies became a popular leisure activity for them."

He added that the screenings also attracted lots of nearby villagers.

He never stopped, even on the coldest days.

"Temperatures could drop to－30 C in winter," he said. "To prevent the projector from damage due to the extreme coldness, I had to put it indoors, and the images were projected through the window."

"As head of the project, I oversaw the completion of every detail, including the installation and debugging of the equipment, the seating setup and the layout of the loudspeakers," he said.

"The cinema became the first movie memory for nearby residents over the following decades."

After three years' work in the cinema, You was made a member of the headquarters' administrative staff.

"Whenever I had spare time, I would watch a movie in the cinema," he said. "Instead of standing beside the projector, I could sit for the whole movie."

About 20 years ago, You found that old cinemas were disappearing as digital movies became more common.

"Compared to celluloid, digital movies are higher definition and lower cost," he said, "and they are easier to preserve. Temperature, humidity, light and other factors accelerate the aging of film. Slowly, it became difficult to find new movies that were shot on film."

In 2002, a friend sent You an old projector. "Although the projector didn't work well because it hadn't been properly stored, it gave me the idea of saving old movies," he said. "I began to collect copies and projectors wherever I could."

You visited almost all the flea markets in Harbin as well as film production companies, and he spent over 300,000 yuan ($46,590) buying around 300 old movies and five more projectors.

"Films can be kept only for about 100 years in the right conditions," he said.

"I've installed a humidifier to keep humidity at a proper level. I also have to re-spool them on the projector from time to time, to prevent the celluloid from sticking."

As You collected more films, he was regularly invited to screen movies with revolutionary themes for the staff at the factory.

After retirement in 2014, he had enough spare time to show his old movies at residential communities and campuses.

"I'm so glad when audiences are moved by these old films."

Each time You has a screening, volunteer Zhang Jinlong will sit and enjoy the movie after showing people to their seats and turning off the lights before the screening starts.

"I am also an old movie enthusiast," the 62-year-old retired civil servant said.

"When I was young, watching a movie was a rare opportunity."

"We have the same desire, to give more people the chance to watch these old movies again before they disappear," said You.