Adorned with elegant pictures of plum blossom in winter and characters expressing a resolute belief in China’s prosperous future, a public advertisement in the style of a book has recently garnered the attention of many residents in Harbin’s Nangang district, capital of Heilongjiang province.

The larger than life book in Nangang district, themed on the resolution to realize the Chinese dream, is just one of a series of book-style public advertisements in Harbin. Another “page”, depicting people and animals living harmoniously in beautiful environment, was seen in Daoli district on Nov 4. 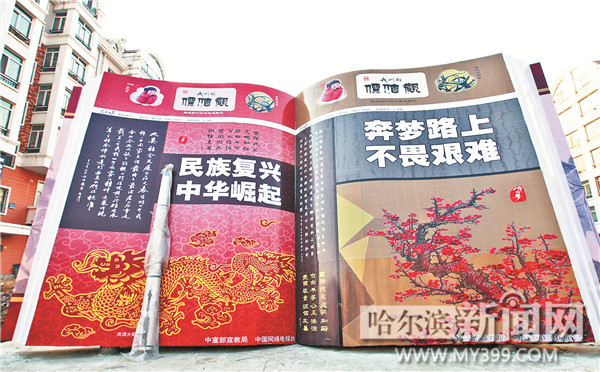 The six-meter-long and four-meter-wide “book”, displayed in the Nangang district of Harbin, the capital of Heilongjiang, showcases the resolve of realizing the Chinese dream through the thick and thin. [Photo/my399.com]