Sponge Bob gets iced, via Harbin 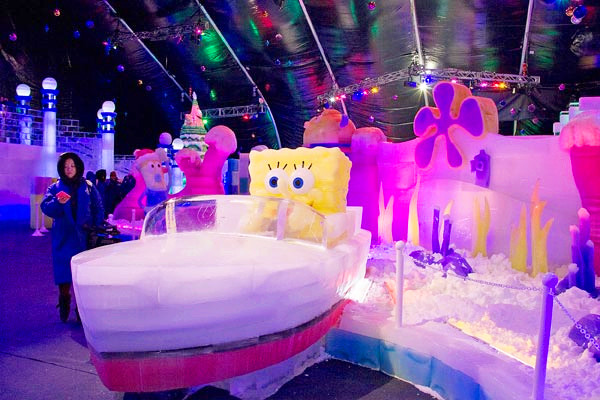 The world of Bikini Bottom in SpongeBob Square Pants becomes an ice land this holiday season at Moody Garden in Galveston, Texas. [Photo by May Zhou/ China Daily]

This winter, visitors to the Moody Garden at Galveston will see the handiwork of 29 top ice sculptors from Harbin, China, who have transformed 900 tons of ice in a 28,000-square-foot tent into an exhibit celebrating the popular cartoon show.

The special holiday attraction is a collaboration between Nickelodeon, Moody Garden and VYA Ice Carving Team.

Since 1963, ice sculpture has been a tradition in China's northern city of Harbin, where Siberian winds keep temperatures at 30 degrees below zero most of the winter.

Creating and sustaining a frozen world in Galveston, an island city with winter temperatures in the 50s and 60s, was no small matter.

The preparation started in February when the first ice cube was frozen in a Texas factory. Besides crystal clear ice, more than 40 colors of ice were required to render the cartoon characters accurately.

In May, a construction team tore up a portion of Moody Garden's parking lot, poured in reinforced concrete and set up insulated tent that could withstand hurricane-strength winds of 130 miles per hour, just in case.

In September, the 900 tons of ice was moved into the tent, the ice sculptors flew in from China and completed their carving in 47 days.

John Zendt, CEO and president of Moody Garden, said that they chose to work with Nickelodeon because SpongeBob is the number one animated character in the world.

"The display tells a story," said Zendt. "We know that the character Plankton has always tried to steal the Krabby Patty recipe, and at first he succeeds by using a ray gun to freeze everyone, not only stealing the recipe but also ruining everyone's Christmas. However, SpongeBob later gets the ray gun, freezes Plankton, gets recipe back and saves Christmas."

The temperature inside the tent is maintained at a constant 9 degrees Fahrenheit, a temperature not experienced in Galveston for 115 years, said Zendt. Visitors will be issued heavy jackets to keep warm.

VYA's US president Kun Lu said that contrary to popular belief, it's not that easy to sculpt cartoon characters. "SpongeBob's legs are so skinny, they are easy to break. Squidward and jelly fish have tentacles and skinny arms. The team had to be creative and careful with it," said Lu.

Fan Yongqiang is the only ice sculptor who stayed behind in Galveston after the major work was completed to make any repairs that may be needed until the show ends.

Fan, who grew up in Harbin, said he won his first ice-carving competition when he was in fourth grade. "I continued to participate in the annual contest and won prizes of one kind or another every year until I graduated from college in 2006 with a major in urban sculpture," said Fan.

With years of ice sculpture experience, Fan said he found it unique to work on the SpongeBob project: "I have never seen so many different colors used in ice carving before. We had to use color cards to identify all the colors," he said.

This was Fan's first ice-carving experience abroad. "I find it easier to work here because the ice is softer, smaller and easier to handle. In Harbin, we have naturally frozen ice blocks as big as 2 meters. It's colder so the ice is harder to handle," he said.

Fan expects to have a bit more leisure time for himself after the show starts. "I find the colors of the sky here are so beautiful with such nice contrast, I think I will try painting the scenery by the sea when I have some free time," said Fan.

Tom Kenny, the voice of SpongeBob in the past 17 years, praised ice sculptures. "I love it, it's so artfully done," he said. "It's nice to see SpongeBob done in different ways. Just when I think there is no more format that SpongeBob could be in, there is something else. Now he is in ice!"