Scholars and animation experts gathered for this year’s China International Youth Animation & Comics Week, which kicked off at the International Conference Exhibition and Sports Center of Harbin, capital city of Northeast China’s Heilongjiang province, on July 12. It will last until July 16.

The opening ceremony was held at the same time as an awards ceremony for the third China International Youth Animation and New Media Creative Competition.

Zhang Lixin, director of Harbin’s municipal publicity department, extended a welcome to foreign and domestic guests on behalf of the Harbin municipal Party committee and government.

"As an excellent language for international cultural exchange, animation has improved China’s communication with the rest of the world,” she added.

She said Harbin had conducted exchanges and cooperation with the world in many fields of the animation industry, including products, technology, copyright and professional training, all of which have gained an international presence from its original animation work and promoted its "going global” strategy of culture for the city. 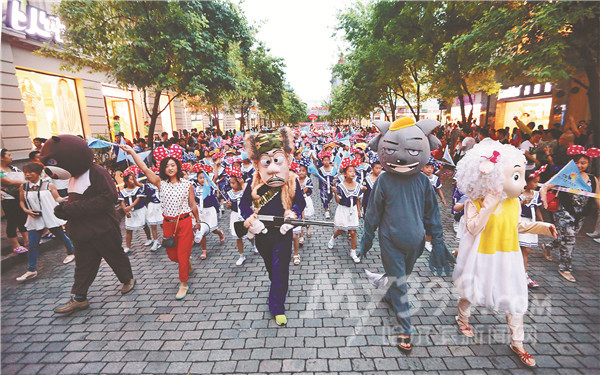 Performers dressed in cartoon costumes participate in a parade to celebrate the opening of this year’s China International Youth Animation & Comics Week along the Central Avenue in Harbin’s Daoli district on July 12. [Photo/my399.com]

During the five-day event, there will be more than 30 activities in varied themes, such as trade promotions, art exhibitions, competitions, and forums, with the participation of about 10,000 animation fans and visitors from China and abroad.

The animation festival is sponsored by the Harbin municipal government and a group of associations under the central government, such as the China Education Association for International Exchange, the National Center for Educational Technology, and the China Radio & Television Association, hoping to cultivate China’s animation professionals and develop the creative industry.

Initiated in 2007, the Youth Animation & Comics Week event has developed into the most influential of its kind in Northeast China.