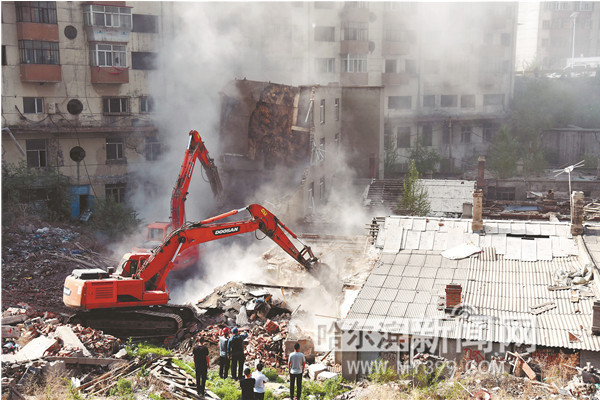 About 10 government departments in Daoli district, Harbin, Heilongjiang province, carried out joint enforcement June 1 to remove more than 20 illegal constructions with a total area of over 2000 square meters to advance an expropriation project.

The illegal constructions were located in a “big pit” with a total area of 5,000 square meters on Longkui Road, which connects Qunli New District and Haxi New District.

Although Longkui Road has played an important role in linking the two new districts since it opened to traffic on July 10 last year, the decrepit environment caused by the “big pit” and the illegal constructions has blocked part of the road and seriously affected local residents.

Before the removal works, the local government and related departments consulted with the local residents for six years, however, some have persisted in refusing to move from the area. In the “big pit”, there was a four-story building, a three-story building and a dozen of single-story houses. These buildings have been heightened and widened illegally. The “big pit” on Longkui Road has produced piles of garbage, having a bad effect on the surrounding environment.

According to Daoli enforcement divisions, most of the buildings in the “big pit” were illegally constructed without any planning approvals. In the 1990s, to solve the housing problems of employees, the local print machinery plant constructed two single-story family dormitory buildings at the hollow. Some plant managers allowed migrant workers to construct a series of illegal buildings.

As a result of these illegal constructions, the environment around the plant’s family dormitories sharply deteriorated. Sewer pipes broken by illegal buildings could not be drained. This forced the residents themselves to pump water out of the flooded houses on rainy days. There were no toilets and sewerage resulting in garbage and sewage spilling all over the area. Especially in summer, the residents have had to close the doors and windows to keep out mosquitoes and flies. Most residents in these illegal buildings have not had formal careers, and unemployed people have often become involved in arguments and brawls.

As the population density of new districts and people’s commuting needs have continuously increased, it has become important for municipal and district-level governments to open Longkui Road. In May 2012, Daoli district decided to initiate a shanty towns project near the print machinery plant to remove obstacles on Longkui Road.

To advance the smooth development of the shanty towns project, officials from Daoli district government and relevant departments visited the residents day and night, acknowledging the conditions, listening to residents’ appeals, and publicizing the official collection policies. They have also established records for each house and issued relevant over 1,500 legal documents against the owners of illegal constructions.

With careful and considerate arrangements, the subsequent expropriation work has been effectively promoted and misrepresentation avoided. Most residents have actively supported and cooperated with the local government. “Thanks to our Party and government, we moved out from damp and messy houses and now live in comfortable apartments,” local residents said.

In November 2017, Daoli district government organized relevant departments, including the Enforcement Bureau, in accordance with the relevant laws, to conduct forcible demolition of three illegal buildings which were partially blocking Longkui Road. After the legal demolition, the Expropriation Office of Daoli District arranged temporary accommodation for affected residents.

At present, about 20 illegal buildings remain in the “big pit”, and the area has been listed as a municipal- and district-level shanty town and an environmental treatment project. Paying great attention to this project, the Daoli district government has set up a special office and formulated further plans to take action to dismantle the remaining illegal buildings.