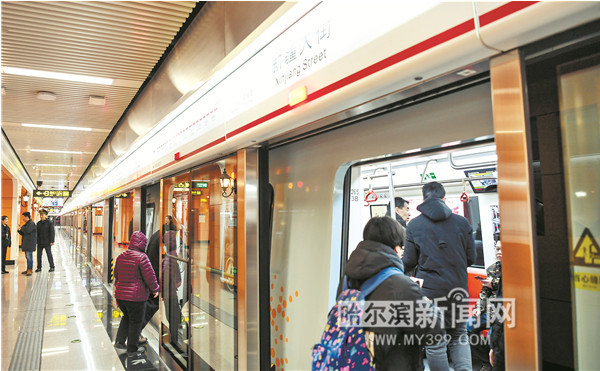 The third phase of the metro line 1 in Harbin, Heilongjiang province, started trial operations on Jan 28, according to information released by Harbin Metro Group.

The extension to line 1 connects Pingfang district with the downtown area of the city.

There are a total of five stations along the extension, which terminates at Xinjiang Street Station at one end, and Tongjiang Road Station at the other.

Each station is equipped with an intelligent ticketing system, allowing passengers to purchase tickets or top up transport cards using mobile payment apps such as Alipay and WeChat, or via a bank card.

In order to promote the new metro, from Jan 28 to 30 a total of 10,000 free tickets were distributed to Harbin residents, giving transport operators the opportunity to test the line’s systems.

“It takes only 50 minutes to travel between Harbin East Railway Station and Xinjiang Street Station, saving around one hour compared to using the bus,” said a Harbin resident who used the metro on Jan 28.

According to Harbin Metro Group, the new line extension will bring greater convenience to passengers traveling around the city, cutting traffic congestion on Harbin’s roads.