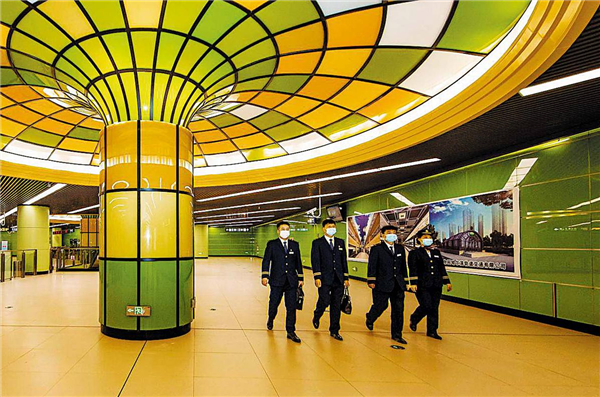 According to the Harbin Metro Group, 98,400 passengers rode the line, which runs through the districts of Hulan, Songbei, Daoli, Nangang and Xiangfang, on opening day. Line 2 will become the backbone of Harbin's rail transit network from north to southeast, connecting areas along the southern and northern banks of the Songhua River.

With 19 underground stops, the 28.7-kilometer line is the country's first "line-network-type" smart subway, which makes use of an urban metro operation and maintenance management system based on the cloud, big data and intelligent technologies to provide passengers with greater travel convenience.

Ticket vending machines support voice recognition, and a multimedia information platform enables passengers to search for information from anywhere at any time, and the new Terasnap security checks are designed to save time.

Passengers can make use of a facial recognition system to board and pay fares without having to remove their face masks.

To do so requires them to download a mobile app called Zhihuixing.

After completing the online registration and facial recognition authentication, they can experience greater convenience and speed when entering and exiting stations.

Multimedia screens on the platform screen doors display each train's arrival time, its degree of crowding and the environmental quality. It can also relay emergency warnings.

After using the new line on its opening day, Wang Xinna immediately decided to travel by metro instead of driving to work every day. "It took only 15 minutes from Shimao Avenue Station to People's Square Station, which links my home and workplace," said Wang, a 40-year-old journalist. "It usually takes me over half an hour, and even more during rush hour, to drive to work.

"It was a really pleasant experience. I really liked the European-style design of the stations, which also incorporate local elements. I was even more surprised when I found that the seats warmed as the temperature lowered. Taking the subway will eliminate my biggest daily problem, which is finding a parking space."

The new line also makes Harbin's metro the first in China to cross a river in a cold, alpine region, the group said.

During construction of the tunnel, which runs for 1,906 meters at a depth of 1,200 meters, builders dealt with many difficulties.

To cope with the complex conditions below the Songhua, builders had to change the way tunnels are normally built by increasing the thickness of tunnel segments, steel content and concrete strength.

Another big problem they faced was the bitter coldness, which can drop as low as－30 C in the winter.

Industry-leading cold-resistant and thermal insulation technology was employed to keep the machines operating normally. Of the 19 stops, eight stations serve as transfer stations for Harbin's metro Lines 1, 3, 4, 5, 6 and 8.