A cold front has descended on many provincial capitals, with temperatures in some cases hitting well below -20 C, while temperatures in parts of central and eastern areas are predicted to hit record lows, the National Meteorological Center said.

The cold spell has claimed lives and led to calls for public buildings to conserve energy to ensure heating for residential areas.

Some areas in Inner Mongolia witnessed the mercury falling to -40 C on Saturday and Sunday.

Highways in Yantai, a coastal city in Shandong province, were temporarily closed on Sunday due to heavy snow.

Heavy snow will continue hitting northeastern parts of Shandong province and northwestern parts of Xinjiang through Sunday and Monday.

The lowest temperature recorded in Harbin, Heilongjiang province, was -29 C on Sunday, not much colder than the highest of -22 C. Tuesday is predicted to be the coldest day, when the thermometer is expected to record -33 C.

In the neighboring province of Jilin, the lowest temperatures in the cities of Changchun, Liaoyuan, Tonghua and Baishan could also plunge to -33 C on Tuesday, the center said.

The average temperature in Jilin this winter has been -24 C, 11 to 14 degrees lower than in other years.

In Changchun, capital of Jilin province, the city government has asked that home heating be increased.

Homeless aid stations in the city also responded by searching for those in need of help, especially children.

In Shenyang, capital of Liaoning province, residents said even their eyelashes began to ice up when they went outside.

"The wind blowing on your face is like knives," said Zhao Jie, a resident. "Nobody is willing to stay outdoors after work.

"Many old residential buildings have problems with their heating, so the temperature in these places may be quite low."

Beijing has been shivering over the weekend, with the lowest temperature on Sunday falling to -13 C. As cold as this was, it was just short of the 10-year record -13.5 C, said Chen Dagang, senior engineer at Beijing meteorological bureau.

The municipal government ordered hotels, restaurants, government departments and public-funded institutions to reduce their heating demands on Saturday to ensure heating for residents would be guaranteed.

About 3,900 public buildings in Beijing were asked to keep their indoor temperatures under 22 C and heating systems for government buildings were requested to maintain a temperature of 5 C.

Overheating in public buildings will be punished, according to the government.

More than 100 extra buses have been allocated to key routes that link major residential areas to transport pivots and shopping centers, according to Beijing Public Transport Holdings.

"I haven't seen such cold for at least 15 years," said Wu Xinxin, a white-collar worker in Beijing. "Most of my female colleagues have been wrapping themselves in blankets.

"I wrap myself up with a quilt at home as the central heating sometimes doesn't generate enough warmth, so I have to use an electric heater."

Two tourists died on Sunday after being trapped for at least 18 hours on Lingshan Mountain on the border of Beijing and Hebei province. They were reported missing on Saturday afternoon and found Sunday morning. One was dead at the scene and the other died shortly after being found.

The temperature on the mountain was -25 C on Saturday night and there were strong winds, the police said.

In Shanghai, the municipal meteorological bureau published a 24-hour warning on Sunday afternoon.

In the coastal province of Zhejiang, the meteorological bureau forecast that most of its cities will see a substantial drop in temperature on Monday, possibly hitting -6 C.

"There are so many customers ordering our down jackets, forcing us to stop receiving online orders since Saturday," said Hu Haixia, owner of a down jacket tailoring store in Hengdian, Zhejiang.

Increasingly lower temperatures in the past month have led to rising pork prices, according to Xinhua News Agency's price system on national farm produce. 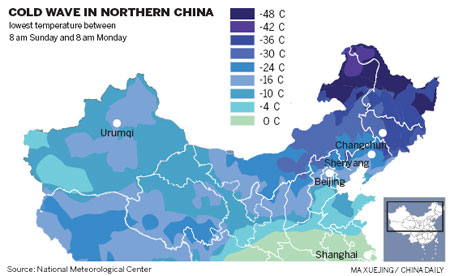