Cheng Cheng, a child with cerebral palsy, smiles with his parents in a breakfast shop in Harbin, capital of Northeast China’s Heilongjiang province. [Photo/my399.com]

Many taxi drivers, sanitation workers and other residents in Harbin, capital of Northeast China’s Heilongjiang province, have been regular visitors of a simple breakfast shop on Youyi Road, Daoli district.

The breakfast shop is the sole source of income for Zhang Chunwu, Sun Haiyan and their son Chengcheng, who has been suffering from cerebral palsy since he was four months old.

Zhang Chunwu and his wife are farmers from Fuyu county of Harbin. They used to have a decent house and broad field, a dozen milk cows, a harvester and an easy life.

In March of 2013, the couple had their long-awaited son at the age of 38 and enjoyed the happiness of a perfect family.

However, the happy family life didn’t last long after their son Cheng Cheng was diagnosed with cerebral palsy in July.

For the following months, the couple kept seeking treatment for their ill baby in different hospitals.

After seeking treatment in Beijing four times, the couple heard from medical experts in Beijing that the baby suffered from cerebral congenital palsy and there was no hope of recovery.

Finally, the couple chose to believe the medical advice of an expert from Harbin Children’s Hospital: the cerebral palsy was not congenital and the couple can support their child in recovery.

At the beginning of 2011, the couple rented a small house right in front of Harbin Children’s Hospital. The wife continued to take the child to rehabilitation treatment while the husband worked as a migrant worker to make money for medical fees.

The good news is that Cheng Cheng can crawl and speak several words now. Every improvement of their son would make the couple burst into tears with happiness.

Unfortunately, Zhang’s waist was injured from overwork. He’s been unable to do hard labor since the beginning of 2014.

To continue treatment for Cheng Cheng and support the family, Zhang learned to make bean curd jelly and steamed dumplings.

With assistance from relatives, they rented a basement with an area of 10 square meters or so and opened a breakfast store near Harbin Children’s Hospital this July. 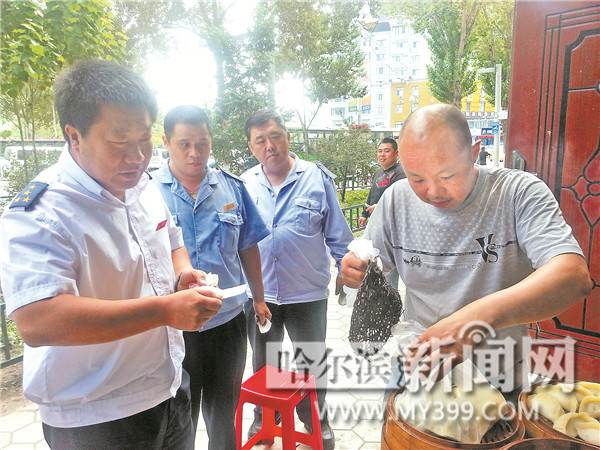 Zhang Chunwu picks dumplings for residents to help his family at the breakfast shop in Harbin, capital of Northeast China’s Heilongjiang province. [Photo/my399.com]

Zhang’s breakfast shop charges 50 cents for a bowl of bean curd jelly and 7 yuan for a tray of steamed dumplings.

"I am sure that the meat of Zhang Chunwu’s steamed dumplings is fresh and clean. I saw him buying the meat at the no 46 booth in the market," a vendor in the nearby market said.

For the past three years, the couple has become acquainted with people living or working near Harbin Children’s Hospital.

"The butcher discovered our family’s difficulties and always gives me a discount on meat," said Zhang emotionally.

A senior citizen at the age of 77 walks miles to come for breakfast in the store since its opening. “Breakfast can be found everywhere, and I come to Zhang’s store to support him.”

A sanitation worker of the street told the reporter that she once came across Zhang’s wife Sun Haiyan selling eggs in the morning market. Sun had to sell some of the eggs sent from Cheng Cheng’s grandparents to buy fresh vegetables for the child.

"Poor parents! I hope their child will recover one day," the sanitation worker said with a sigh.

Failing to raise enough money for the rehabilitation fee, the couple had to stop visiting the hospital in August.

Sun follows the commands of a doctor and guides Cheng Cheng to do rehabilitation exercises at home.

A helping hand from society Zhang Chunwu and his wife Sun Haiyan enjoy sunshine with their son Cheng Cheng in front of their small breakfast store in Harbin, capital of Northeast China’s Heilongjiang province. [Photo/my399.com]

Harbin Daily reported stories of the couple on Sept 17. The story received an active response from society.

Many residents came to Zhang’s store for breakfast with a newspaper in hand. They left the store in a hurry after ordering a bowl of bean curd jelly for 10 or 100 yuan, asking them to keep the change.

The simple and honest Zhang insisted on giving change, but people refused to take it. The eyes of the 42-year-old Zhang were wet while serving customers from far away.

Apart from visiting the breakfast store to support Zhang’s family, many people found other ways to help the child.

Chen Qingfeng, who learned the story from WeChat in Australia, sent a loving message: "Hold on! I’ll send fish oil and health food for Cheng Cheng after consulting a pharmacist, hope it helps."

"My child was also diagnosed with cerebral palsy. My child improved a lot after an autologous stem cell transplant in the neurology department of the General Hospital of People’s Liberation Army (301 hospital)," said a lady from Beijing.

Liu Lu, director of the cerebral palsy recovery center of the Harbin Disabled Persons' Federation, invited Cheng Cheng to join their center: “We’ve received more than 200 children with cerebral palsy in the center. We also offer rehabilitation tools and nutrition for children. It is all free.”

Thanks to help from society, Cheng Cheng can continue the rehabilitation treatment. Zhang Chunwu and his wife Sun Haiyan believe that Cheng Cheng will be able to walk, learn and stand on his own feet in society one day.