Goods carried by freight trains along the Ha'ou Route at a container distribution center, waiting for transport to different destinations in Europe. Photo by Chen Baolin / For China Daily

"It's different from the past. The 144 containers will first arrive at Russia's Primosky Krai through Suifenhe, one of the border cities in the province, and finally get to South Korea," Pan said. "It costs as much as the way through the port of Dalian, but it will save me at least two days. And with the operating normalization of the China-Russia-Asia channel, it is expected that the economic costs will go down in the future."

"Heilongjiang province in Northeast China actively boosts construction of the Heilongjiang Land and Maritime Silk Road Economic Belt, part of the country's Belt and Road Initiative proposed by President Xi Jinping in 2013," said Wang Xiankui, Party chief of the province, when he met a Hong Kong delegation led by Tung Chee-hwa and Li Haifeng, vice-chairmen of the National Committee of the Chinese People's Political Consultative Conference, on Sept 10. "The province has already made some progress and it provides a wide platform for China's opening-up toward Russia and Northeast Asia."

While building the economic belt, Heilongjiang's government also focuses on promoting construction of supporting facilities, and cooperation on energy and environmental protection with other countries and regions in Northeast Asia and Europe, as well as cultural, scientific and technological exchanges.

The province hopes more large logistics companies and comprehensive logistics industrial parks will help the development of commerce, trade and logistics on the Heilong-jiang economic belt.

The provincial government plans to boost construction of the Harbin railway container distribution center to help it become an international logistics platform.

Since the first freight train along the Ha'ou Route (Ha for Harbin, ou for Europe) left Harbin on June 13, 14 more trains have departed from Harbin.

The trains traveled to Germany and Poland through Russia with containers full of electronics, mechanical processing tools, auto parts and chemical products.

The Ha'ou freight rail transport service is provided by Ha'ou International Logistics, a conglomerate of domestic logistics companies and the Harbin Railway Bureau. 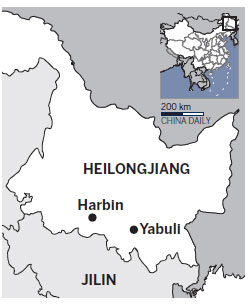 According to Ha'ou International Logistics, the Ha'ou rail freight route is the most profitable route traveling from China to Europe and Asia, based on cost, distance and train speed. By the end of this year, the train is expected to have made 26 trips.

Now, the railway line has become a part of China's Silk Road Economic Belt running across Asia to Europe and the 21st Century Maritime Silk Road, running all the way to Africa. And it has great commercial value along the way.

The train opens a new channel for China's imports and exports, and promotes economic and trade cooperation among China, Russia and Europe. It can bring more resources, technology and capital to Heilongjiang for production and development of trade and industries along the line.

The railway line has received significant attention from large enterprises and governments in China and abroad. They expressed interest in cooperating with Ha'ou International Logistics and establishing friendly relations with Heilongjiang. Sakhalin's exhibition stand at the first China-Russia Expo in Harbin in 2014. The exhibition attracted more than 10,000 overseas customers, including about 5,000 Russian customers, from 67 countries and regions in the world. Zhao Yunpeng / China Daily