Red-crowned cranes fly over the reed swamp of Zhalong Nature Preserve, known as "the land of cranes".[Photo provided to China Daily]

He also enjoyed seeing - and eating - the fish in its waters.

That's not to mention wearing long sleeves in the summer, as his native Beijing baked in late June.

It was breezy and dropped to 13 C in mornings, he says.

"I took the trip to escape the heat. I felt bad for my friends back home," he says, jokingly.

But he discovered more than cool climates at such places as the island of Zhenbaodao's wetlands in the center of the Wusuli River that runs between China and Russia.

There are also pristine natural areas inhabited by wildlife.

Chen boated Jingpo Lake and visited a nearby lava cave.

He watched performers jump from the Diaoshuilou Waterfall. 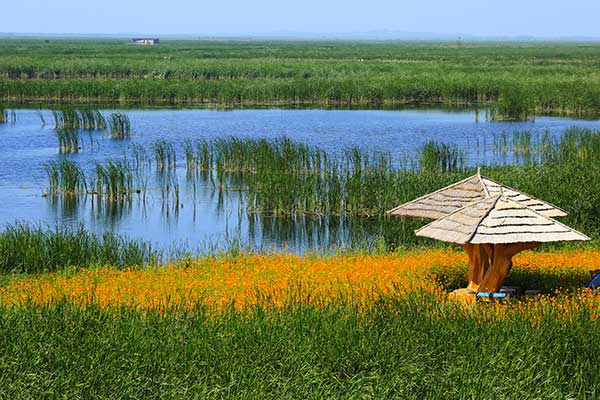 The area around the cascade is a honeycomb of misty caves that contain ice year-round.

The province is developing travel routes to enhance its wetland tourism, especially for summer vacationers.

It also plans to integrate history, ethnic culture and foodstuffs into marshland excursions. It hopes to develop packages with such themes as sports, leisure and health.

It recently created products for students and children to interact with wildlife during their summer breaks. And it has introduced helicopter rides over the wetlands, says the Heilongjiang tourism development authority's deputy director, Hou Wei.

China's northernmost province is saturated by its vastest wetland clusters, covering 55,000 square kilometers. They account for an eighth of the country's total and equal the size of Hainan province.

Two of the five summer routes that provincial tourism authorities announced in May focus on wetlands.

Qiqihar is celebrated for barbecue. Russian culture can be experienced at the Heihe-Blagoveshchensk border.

The preserve of Naoli River's wetlands is among the top 10 wetlands in Heilongjiang province.[Photo provided to China Daily]

The second route includes Khanka Lake, which truly looks like a sea of reeds traced by the country's longest beach. It also features Mudanjiang, and Jixi's Hulin and Mishan, plus Jingpo Lake. It crosses Sanjiang, Zhenbaodao and Qianniao Lake's wetlands.

Visitors can explore the ruins of Hutou Fort, a Japanese military base during the War of Resistance Against Japanese Aggression (1937-45).

Nanwenghe Wetland is taking its offerings to new heights by offering overviews from helicopters, viewing towers and hot-air balloons.

Its hot-air balloon program took off on June 22.

Visitors enjoy sunrises from its sightseeing tower, and they can view wildlife from elevated decks.

Health and science popularization tours have been developed.

The island of Zhenbaodao has also built a viewing tower and temple.

The preserve of Naoli River's wetlands has developed historical routes arranged according to events' chronology. That's not to mention yachting and boating experiences.

The proliferation of new offerings makes Chen want to return, he says.

"I'd like to try other new summer routes," he says. 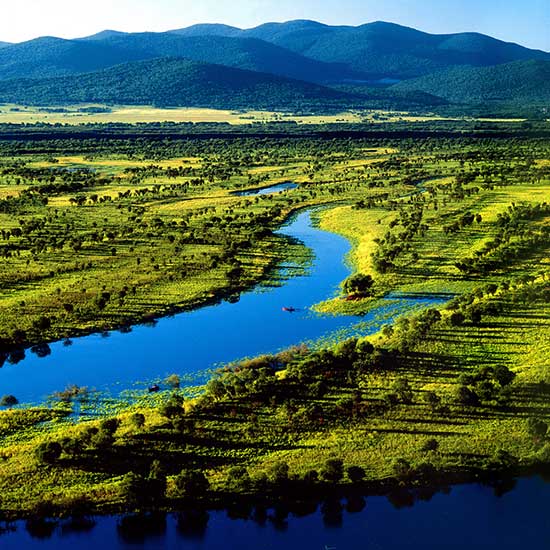 Heilongjiang province named its "10 most beautiful wetlands" on June 19.

The wetland sits amid the Lesser Hinggan Mountains and is one of China's biggest primitive wetlands. It hosts diverse flora and fauna, including the white-headed crane and the oriental white stork.

Songjiang's wetland distinguishes itself from others by integrating urban and natural landscapes. It displays Harbin's ecological diversity.

The national reserve is located in the Greater Hinggan Mountains and features inland wetlands and water-based ecosystems within coniferous forests. Plank roads, a lookout pavilion and a watchtower have been built.

The natural reserve hosts Qianniao Lake's wetland, which was named the most beautiful of its kind in 2012. Visitors can watch birds, pick fruit and yacht.

It's an important stopover and breeding site for birds migrating from Northeast Asia. It protects the oriental white stork, whooper swan and red-crowned crane.

The wetland in Jixi city teeters on the boundary between China and Russia. Visitors can watch fish swim and hagdon soar. A museum and a green corridor have also been built.

The park 40 kilometers southwest of Fujin city is home to 290 plant varieties and over 300 animal species, including the red-crowned crane. Tens of thousands of migrating birds rest and breed there every year. The park offers water, land and air tours.