There are several subdistrict offices and residents in the district contributing to the goal of building better communities.

Lizijiangpan Community with 832 households is under the management of Dongyuan subdistrict office. The community keeps itself clean to create a good living environment for local residents. Intelligent management has been introduced for waste collection and transportation; residents can scan QR codes pasted on garbage bins to inform cleaners that they need emptying.

To boost entrepreneurship, a community incubator was set up in Dongyuan Street in October 2016. It’s the first subdistrict–level public service platform combining business training and services for residents in Heilongjiang province. The incubator has so far attracted eight social organizations, 20 service groups and more than 900 volunteers.

Residents also participated in activities to improve their wellbeing. The Voice of Dongyuan Ensemble, a grassroots troupe in Dongyuan Street, has attracted more than 70 enthusiasts of art and opera since it was founded in 2015. The ensemble, which is made up of two groups puts on a performance for local residents every day.

Daxing subdistrict office in Daowai district is in charge of five communities, including Daguanyuan and Hangyun communities, where 36,215 residents live.

Greenery has been added to both public and private areas of the local community, beautifying the environment of the five communities.

The subdistrict has held regular lectures on legal education, health, and science targeting locals. To enhance security it has organized a voluntary patrol group, maintained 648 fire escape passages, and unblocked and equipped communities with some 1,000 fire extinguishers.

Volunteering has also been encouraged. There are exchange shops and charity supermarkets which serve locals experiencing difficulties, including for laid-off workers, the elderly and those living alone in the communities of Daxing subdistrict. Also, staff members from communities regularly visit households experiencing difficulties to learn of their troubles and offer assistance.

Based on cooperation among communities, Daxing subdistrict has created a positive atmosphere for the whole neighborhood, including the elderly and the young, individuals and groups, together building a better living environment. 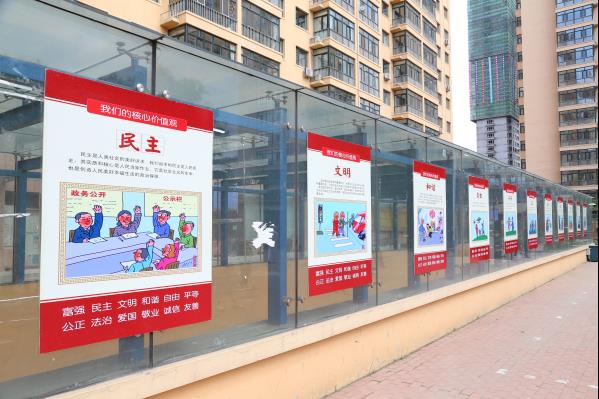 A woman stands next to a garbage bin displaying a QR code at Lizijiangpan Community in Daowai district, Harbin. Once Local residents scan the code, cleaners will come to remove the garbage. [Photo/my399.com]