A dazzling light show illuminated the Harbin Ice and Snow World of the capital city of Northeast China’s Heilongjiang province on Aug 8, at the opening ceremony of the 2017 Harbin First Light Show and Music Festival.

Accompanied by music, a mysterious light world drew a lot of attention from local residents and tourists. Up to 1,000 visitors attended the opening ceremony of the festival staged on Aug 8.

The light show, occupying an area of 150,000 square meters, integrates modern lighting technologies, design creativity and environmental protection; and it will last for two months until Oct 7.

During the event, other activities will also be held, including music performances, a photography competition and a food festival to enrich the tourists’ travel experiences.

Currently, the festival ticket——38 yuan per person——is only available at the six ticket windows at the gate of Ice and Snow World. In the future, the festival sponsor will launch an online ticket booking channel in order to provide more convenience for potential visitors. 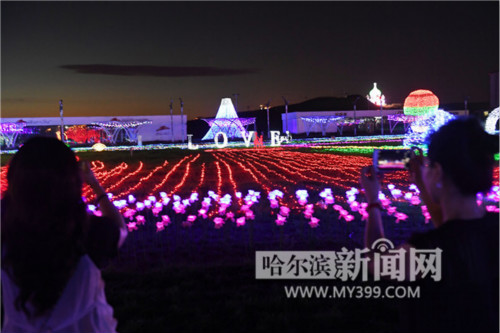 Tourists take photos in a light show area decorated with the letters of “LOVE” at the opening ceremony of the 2017 Harbin First Light Show and Music Festival held in Ice and Snow World in Harbin on Aug 8. [Photo/MY399.COM]

Lighthouses brighten the sky of the Ice and Snow World in Harbin during the 2017 Harbin First Light Show and Music Festival. [Photo/MY399.COM]