The longest tunnel on the Harbin-Mudanjiang High-Speed Rail Line was connected on Aug 20. The breakthrough marks significant progress in overcoming difficult engineering problems in an area that experiences long and cold winters.

The Hufengling Tunnel, with a length of 8,755 meters, is located in Shangzhi city, Northeast China’s Heilongjiang province, which has a high latitude.

Construction work on the tunnel started around two and a half years ago and was completed within 800 days. 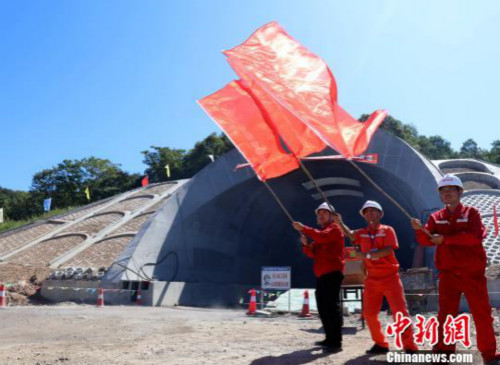 Construction workers wave flags at the entrance of Hufengling Tunnel to celebrate the joining of the two ends of the longest tunnel in China on Aug 20. [Photo/Chinanews.com]

Wang expressed his view that the successful connection of Hufengling Tunnel marks great progress in the construction of the rail line, and has created records for the length of the tunnel, construction time and drainage technology.

The 300-kilometer Harbin-Mudanjiang High-Speed Rail Line starts in Harbin and terminates in Mudanjiang –– a city on the Russian border. It will connect to the border areas of Russia through Suifenhe port.

Upon completion, the new line will shorten the current journey time to around one hour, as it can accommodate trains traveling at speeds of up to 250 kilometers per hour.

The completion of the high-speed rail line is expected to serve as a bridge between China and Russia, boosting bilateral trade, and economic and cultural exchanges. It will also play an important role in rejuvenating the once prosperous Northeast China industrial base. 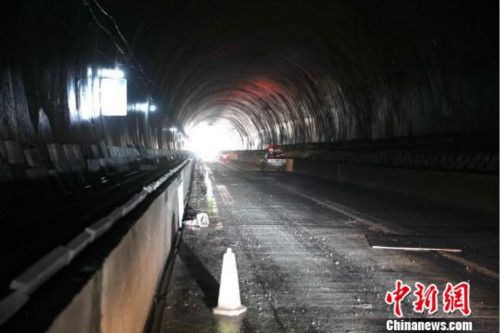 Construction workers celebrate the joining of the two ends of Hufengling Tunnel on Aug 20. [Photo/Chinanews.com]