Harbin, the northernmost capital of Northeast China’s Heilongjiang province, is making efforts to build itself into the largest and most influential winter tourism resort in Northeast Asia.

In response to the newly-released Harbin Ice and Snow Tourism Special Plan, the Harbin government signed an agreement with Sunac China Holdings Limited (Sunac) —a listed company involved in high-end residential, cultural, and commercial facilities — to cooperate in the tourism and culture industries.

Harbin Sun Island Group Co and Sunac have agreed to cooperate to promote Sun Island as an international tourism destination. The island features winter sightseeing and entertainment attractions and is a suitable place for escaping the summer heat.

Several new tourism facilities covering a total area of 1.57 million square meters will be built in the western area of the island, including a 720,000-sq-m outdoor area, a 150,000 sq-m indoor area for the Harbin Ice and Snow World, a 700,000-sq-m wild wetland park, a snowflake-shaped ferris wheel, and an outdoor slide.

The facilities will be planned and designed in an environmentally-friendly way by Cui Kai, honorary dean of the China Architectural Design Institute and an academic of the Chinese Academy of Engineering.

In addition, the Ice and Snow Film and Television City will be constructed in the Songjiang Summer Resort City in Harbin New Zone. It will cover an area of 1.12 million sq m with a floor area of 2 million sq m.

A groundbreaking ceremony for the Harbin Ice and Snow World is held on Sun Island on Sept 20. [Photo provided to chinadaily.com.cn] 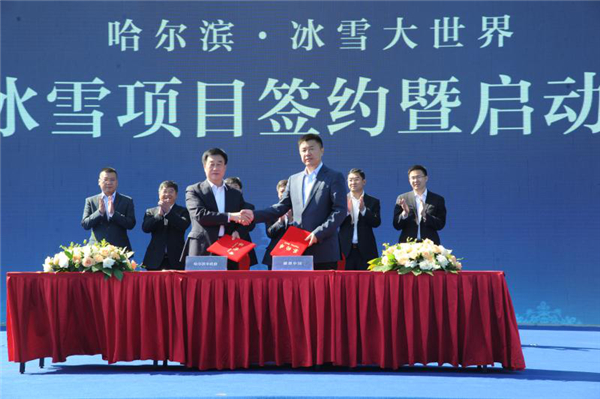 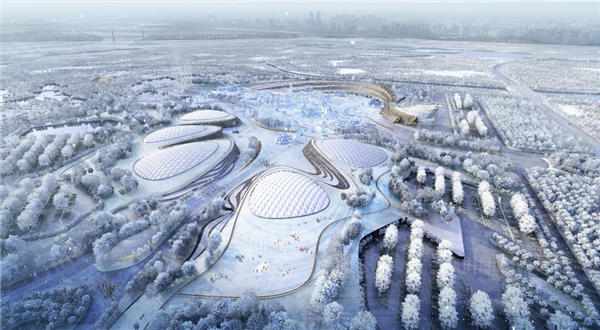 A rendering of the Ice and Snow World in winter [Photo provided to chinadaily.com.cn]