Airline officials said it meets the increasing travel demand between the two cities and will boost regional economic exchanges and trade cooperation.

The flight is served by a Boeing 737-800 and runs every Wednesday, Friday and Sunday with the flight numbers 7C8905/6.

The departure flight time differs according to the dates, airline officials said.

The return flight departs Taiping International Airport at 09:50 and arrives at Seoul at 13:40 hrs.

Currently, there are 17 flights on the Harbin-Seoul route every week. Of these, seven flights are operated by China Southern Airlines, three flights by South Korea Jeju Air and another seven are operated by Asiana Airlines. 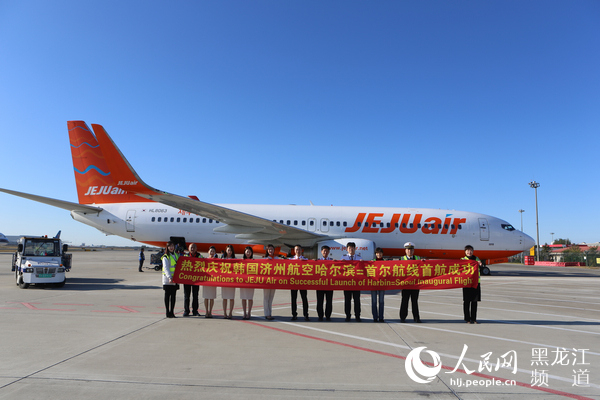 Flight attendants of Jeju Air celebrate the launch of the Harbin-Seoul flight at Harbin Taiping International Airport on Oct 11. [Photo/people.cn]