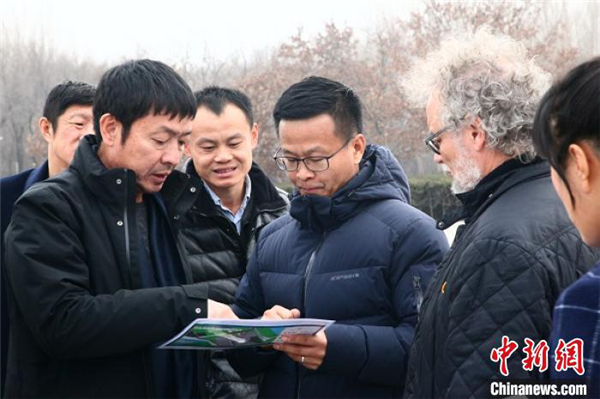 A delegation led by Enrique Quesada, senior director of the International Triathlon Federation Sports Department, pays a visit on Nov 10 to Harbin to inspect the competition site for the 2020 Winter Triathlon World Cup Championship. [Photo/chinanews.com]

That was after a two-day on-site field visit led by Enrique Quesada, senior director of the International Triathlon Federation Sports Department, according to information released by the Heilongjiang Provincial Sports Bureau on Nov 13.

Harbin will be the first city in China to hold an event of its kind, officials said.

The winter triathlon involves a run and mountain bike and cross-country ski (langlauf) events – all on the snow.

Course distances are set on the day to achieve a winning time of around 80-90 minutes, taking into account the latest snow conditions. The organizers said that new challenges are presented at each race and thrilling opportunities are there for those seeking to explore new multisport horizons.

The 2020 Harbin event will be held at Sun Island on Jan 4, one day before the Harbin International Ice and Snow Festival -- one of the four largest snow festivals in the world.

Competition tracks will take participants around the Sun Island scenic spot – the main site of the ice and snow festival -- and onto the frozen Songhua River, allowing participants to enjoy Harbin’s unique winter landscape, as well as ice and snow sculptures.

Competition organizers said that this year’s Harbin event was expected to attract the participation of more than 300 athletes from home and abroad, including Pavel Yakimov, ranked number one in the winter triathlon.

Harbin is the birthplace of China's ice and snow sports, the organizers said.

They added that hosting the winter triathlon was of great importance to promote the development of Harbin’s winter sports and improve its international influence.