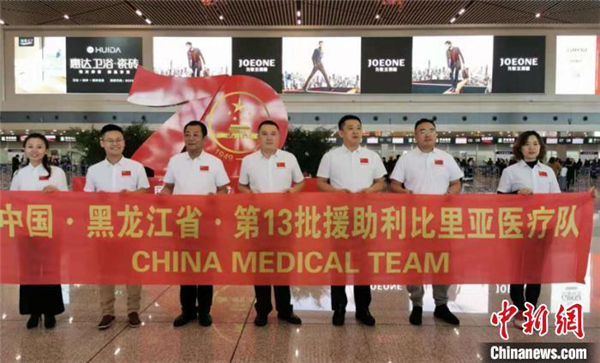 The medical team will conduct on behalf of China a one-year foreign aid medical mission in Liberia.

China has been sending medical teams to Liberia for 13 consecutive years.

Officials said the organizing of foreign aid medical teams was an important part of China's role as a large and responsible country that was participating in the development of an international health governance system.

The 13th Heilongjiang medical team comprised nine medical staff members from the hygiene and health commissions of Harbin, Daqing and Jiamusi, as well as the First Affiliated Hospital of Harbin Medical University. They will provide medical services including surgery, treatment in obstetrics and gynecology, ultrasounds, as well as Chinese acupuncture.

In early 2014, Ebola broke out in some countries in West Africa. The Heilongjiang medical team was the only foreign medical team that stayed with the Liberia hospital during the Ebola epidemic, achieving the goal of “winning the battle and zero infection”.

In July 2019, the Liberian government gave awards to members of the 12th Heilongjiang team of maternity doctors -- highlighting their important role and outstanding contribution to the country.