The 2020 Harbin Finlandia Ski Marathon kicked off in Volga Manor -- a theme park based on Russian culture -- in the city of Harbin, in Northeast China’s Heilongjiang province on Jan 7, according to the organizers.

The ski marathon is an important event of the China-Finland Winter Sports Theme Year and is a joint effort between the Nordic nation of Finland and China to strengthen their winter sports and tourism cooperation.

Officials said the government of Harbin signed a cooperation agreement with the Finland Skiing Association in Beijing on Jan 15, 2019 to introduce the Finlandia Ski Marathon, which is one of the most influential ski marathons in the world.

More than 2,500 cross-country skiers are testing their skills, physical strength and willpower over a three-day competition period.

It includes professional skiers from more than 20 countries and regions including China, Russia, Finland and Norway.

When the marathon finishes, a cross-country ski track -- the first of its kind in Harbin -- will be opened to the tourists, according to the event organizers. Competitors prepare to sprint from the starting line during the 2020 Harbin Finlandia Ski Marathon in Volga Manor in Harbin city. [Photo/chinadaily.com.cn] 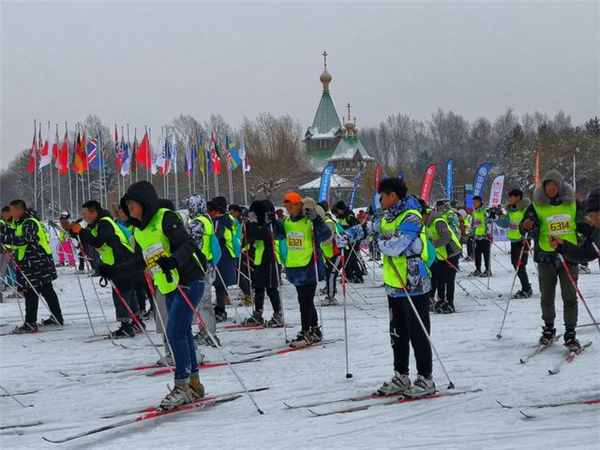