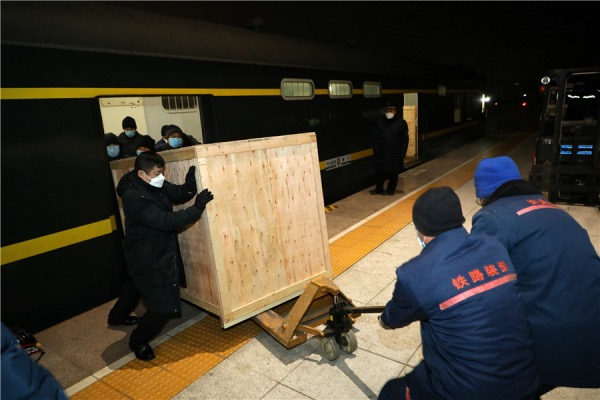 Heilongjiang is facing a shortage of facial masks on the front line of the fight against the novel coronavirus.

"One production line has been assembled overnight in our factory," said Sun Jintao, director of equipment management at the company's general factory. "It is expected to start production next Monday, with a daily output of 20,000 to 30,000 N95 masks."

Simultaneously, many domestic companies are transforming their businesses to provide medical necessities like facial masks for workers fighting on the front lines.

The 12 production lines, including four for N95 facial masks and eight for surgical masks, will be put into operation by the end of February after reconstruction in a 2,000-square-meter dust-free workshop in Liuzhou's SGMW, a joint venture between General Motors and Liuzhou Wuling Motors that founded in 2002 in the Guangxi Zhuang autonomous region.

Daily output can reach more than 1.7 million, which will greatly help relieve the shortage of medical supplies in Guangxi and provide support for epidemic prevention and control.

In Fujian, workers of the famous diaper manufacturer Daddy Baby are busying revamping their original production lines for producing masks.

"By mid-Feb, the first production lines can provide 1.4 million masks per day," said Lin Yanting, deputy general manager. "And daily output can reach 3.5 million by the end of March with expanded production lines."

"After the epidemic passes, the modified mask production line cannot be reinvented," he said. "At that time, we may face the problem of overcapacity."

"However, we believe each mask we produce may save one more person," he added.

Under such situations, demand is also soaring for specialized non-woven fabric, the essential material needed for making masks and protective medical clothing.

As a major producer of polypropylene, the raw materials for non-woven fabric in the country, Hohhot Petrochemical Company in North China's Inner Mongolia autonomous region put in great effort to produce polypropylene under strict standards.

The company has planned to produce a total of 3,000 tons of polypropylene. Each ton of the raw materials can be used to produce about 250,000 protective masks.
Hu Meidong, Yuan Hui and Shi Ruipeng contributed to this story.