Heilongjiang province in Northeast China sent its fourth medical team to Wuhan -- the epicenter of the epidemic in China --  to help fight the novel coronavirus epidemic on the evening of Feb 13, according to local officials.

After the outbreak, the First Wuhan Municipal Hospital was identified as the designated hospital for the treatment of critically ill patients.

Many doctors in the hospital were sent to the newly established designated Leishenshan Hospital and Huoshenshan Hospital for medical support. This resulted in a shortage of medical staff and medical resources.

The Heilongjiang medical team, led by Zhao Changjiu -- Party secretary of the First Hospital Affiliated to Harbin Medical University -- was formed on the evening of Feb 12, after receiving rescue orders from the Heilongjiang Provincial Health Commission.

Among the volunteer medical workers is Chen Hong, director of the second ward of the respiratory department of the Second Affiliated Hospital of Harbin Medical University.

Chen participated in treating the SARS epidemic in 2003 and was also involved in the Wenchuan earthquake relief in 2008.

Since the outbreak of the coronarvirus, he has travelled around Heilongjiang province on Feb 8-12, conducting consultations and treatment of patients with severe virus symptoms.

"No matter how many choices are given to me, choosing to go to Wuhan is the only choice for me. In battles without gun smoke, we must rush ahead!" Chen said.

To date, Heilongjiang has sent four medical teams of around 1,000 medical staff to Hubei province. 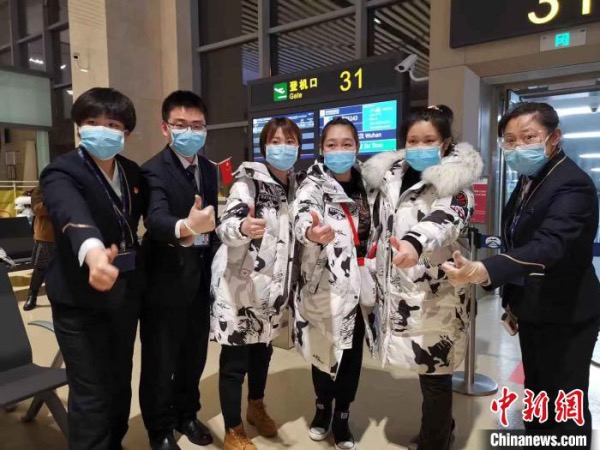 Heilongjiang medical team members give the thumbs up before flying off to Wuhan on the evening of Feb 13. [Photo/chinanews.com] A medical volunteer couple hug before heading to Wuhan on Feb 13.  [Photo/chinanews.com]