Flights carrying a total of 454 medical workers from China's northernmost province of Heilongjiang arrived at Harbin Taiping International Airport in Harbin, the province’s capital city on March 31, according to local officials.

The medical workers belonged to the first and fourth medical teams sent by Heilongjiang province to support Central China’s Hubei province -- the area once severely hit area by the novel coronarvirus.

The teams were the last out of the eight Heilongjiang medical teams heading home, marking a successful completion of Heilongjiang’s medical aid task. 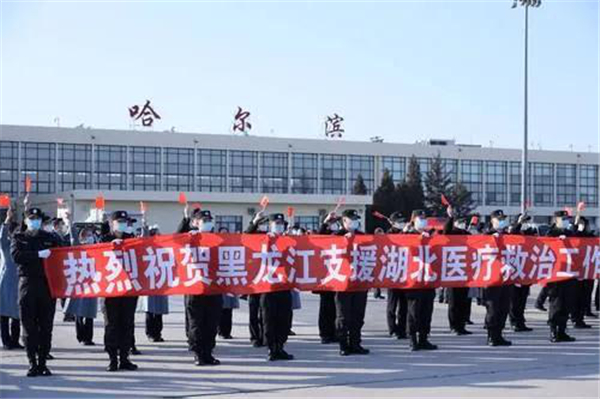 A welcome ceremony for returning Heilongjiang medical teams is held at Harbin Taiping International Airport on March 31. [Photo/hljtv.com]
The medical team departed from Harbin on Jan 27. They took over three wards in Wuhan Xiehe Hospital in Wuhan city, with staff in charge of a total of 140 beds.

The team continued to battle the coronavirus for 62 days. A total of 334 patients were admitted to the three wards. The ratio of severe to critically ill patients exceeded 90 percent, officials said.

Of these patients, there were 43 lying-in women, 26 newborns; one was infected with COVID-19 epidemic after a heart transplant and one after a kidney transplant.

Over a 62-day period, a total of 296 patients were discharged from the hospital, and the medical staff members had zero infections, officials said

Meanwhile, the fourth Heilongjiang medical team arrived in Wuhan on Feb 13 and took over two wards of the First Wuhan Municipal Hospital.