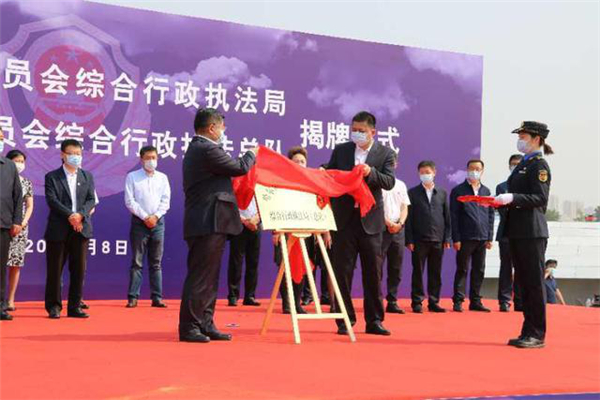 An administrative law enforcement team with wide-ranging powers was officially established on June 8 in Harbin New Zone – located in the capital city of China’s northernmost Heilongjiang province – in a bid to improve its business environment, according to local officials.

Officials said the new team comprises more than 400 administrative enforcement officers, who will collectively exercise the functions of more than a dozen departments.

They will have jurisdiction over 3,389 specific areas, with authorized powers to impose administrative penalties and carry them out. A flag is waved during the ceremony for the establishment of Harbin New Zone’s administrative law enforcement team on June 8. [Photo/chinadaily.com.cn]

Officials said that establishment of the team marked a new direction for the zone’s management – under which the functions and powers of examinations, approvals, supervision and administrative enforcement in Harbin New Zone are clearly demarcated and balanced.

They said the initiative was a breakthrough for the zone in simplifying decentralized admin, as well as providing innovative supervision and optimized administrative services – adding that it would help enhance the overall business environment.

Establishment of the zone, which has a planned area of 493 square kilometers, is part of a new round of strategies in China to revitalize the country’s old northeastern industrial base and promote the wider construction of the Belt and Road Initiative.