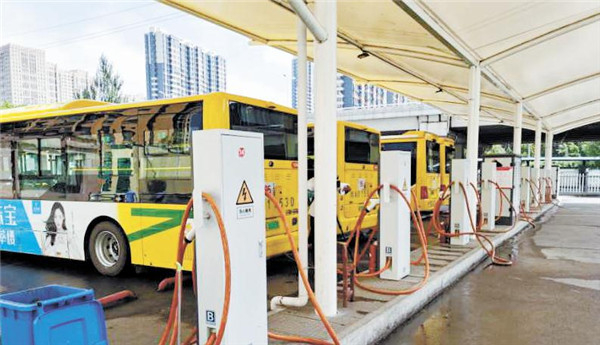 Electricity-driven buses in Harbin power up at the Minsheng Shangdu charging station. [Photo/MY399.COM]

In order to meet the demand for bus charging and boost the overall development of the all-electric vehicle market in Harbin, Harbin Transportation Group plans to build another 120 charging stations and 1,642 charging terminals within two years, according to city transport officials.

When the latest expansion of the network is complete, the total number of Harbin’s charging stations and charging terminals will have reached 136 and 2,504, respectively.

Officials from Harbin Transportation Group said the new facilities will be opened to the public as they are successively completed.

They said that is expected that by the end of 2021, in addition to satisfying the demand for bus charging, more than 20,000 private cars will be able to access a charging service every day.

The 120 new charging stations planned on the drawing boards will mainly use State-owned public land, such as bus stations and spaces under bridges.

Meanwhile, to facilitate the long-distance travel of all-electric private car owners, large-scale energy stations will be built in Harbin’s three remote urban areas of Hulan, Acheng and Shuangcheng districts -- as well as in the nine counties under the jurisdiction of Harbin.