Ticket checking machines allowing passengers to take the metro without having to take off their mask were put into operation in Harbin, capital city of China’s northernmost Heilongjiang province on July 1, according to information released by the Harbin metro group.

Officials said that the Harbin metro is the first metro in China to use the equipment.

Currently, a total of 133 such ticket checking machines are working in 27 stations along Harbin’s metro line 1 and line 3.

Passengers who want to use the new machine just need to download and register on the Zhihuixing app and perform face recognition authentication.

When passengers enter their information on Zhuihuixing, the system will 3D scan the passenger facial features.

The ticket checking terminal system is suitable for use in various complex light environments, which can realize the binocular infrared live detection of passengers and automatically capture their face image.

According to its developer, the system’s misrecognition rate is less than one out of 100,000 passengers. 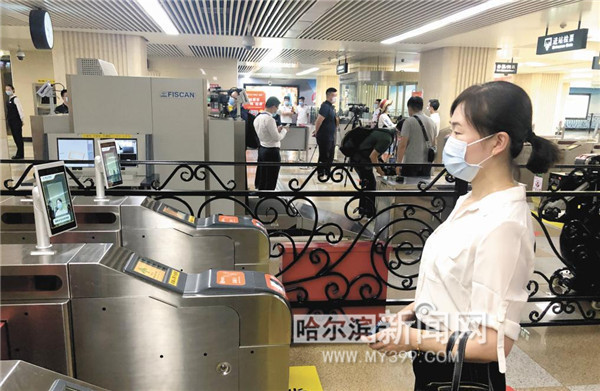 A passenger enters Harbin metro without taking off her mask. [Photo/MY399.COM]

Officials from Harbin metro group said that during normal conditions, the passenger flow of the Harbin metro network is about 300,000 passengers per day.

After the face recognition function is installed in metro stations, more than 20 people on average can enter the station every minute -- that is, one passenger can pass through in three seconds.

Officials said it will greatly reduce the pressure of passenger flows through the ticket checking machine and allow passengers to move quickly.