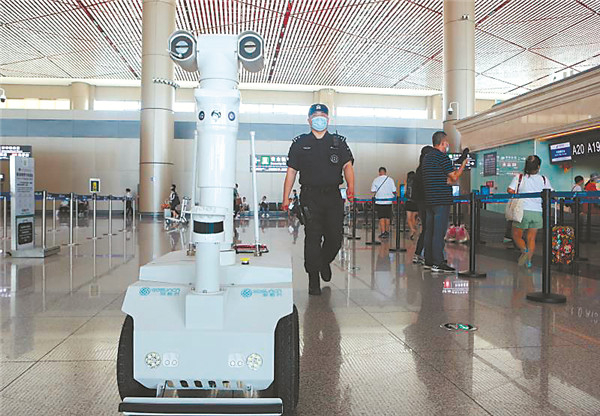 A police patrol robot recently assumed duties at Harbin Taiping International Airport -- in Harbin, capital city of China’s northernmost Heilongjiang province -- according to a report in the Harbin Daily newspaper.

The robot comes equipped with five high-definition cameras, which can achieve comprehensive monitoring.

Officials said the robot is the first of its type used for temperature tests in Heilongjiang province.

It can realize infrared ray rapid measurements of body temperatures within five meters.

The robot can measure the body temperatures of 10 people at a time and the temperature errors are within 0.3 Celsius.

For people whose body temperature exceeds safety levels or who do not wear masks, alarms and reminders are issued on the spot through broadcasts.

The new robot has effectively saved on manpower on duty, but also helped to avoid cross-infection of personnel, according a policeman at the airport public security bureau.