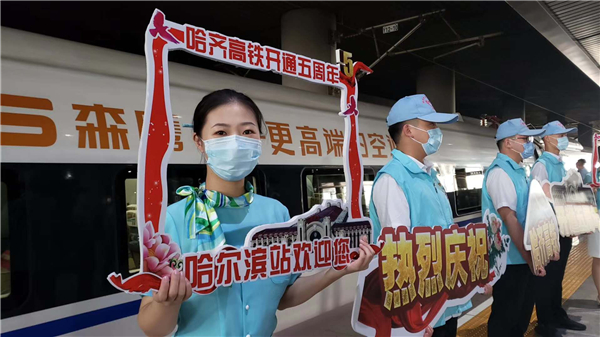 A ceremony to mark the fifth anniversary of the Harbin-Qiqihar High-Speed Railway on Aug 17 [Photo/dbw.cn]

The Harbin-Qiqihar High-Speed Railway(HSR), one of the key projects included in Northeast China's fast passenger transport network, has now been in service for five years, according to rail officials.

The 292-kilometer line links Harbin, the provincial capital of China’s northernmost Heilongjiang province, with Qiqihar, a city in the northwest of Heilongjiang. It traverses areas where temperatures drop as low as -35 C in winters and hit highs of 35 C in summers.

As the high-speed railway operating in the northernmost area of China, the trains have experienced 19 instances of transformation and upgrading to withstand the extreme cold. 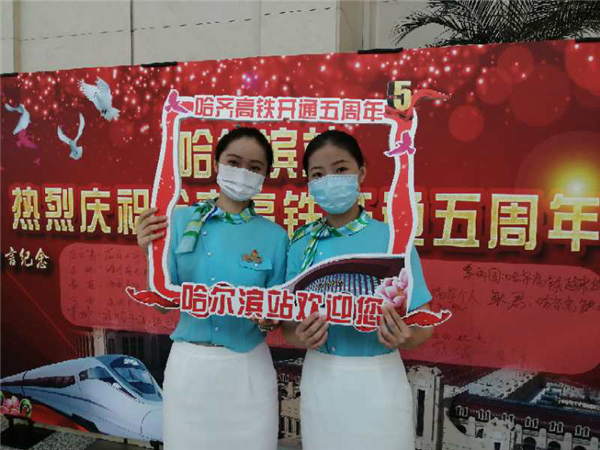 Train attendants serving the Harbin-Qiqihar High-Speed Railway pose for a photo at the fifth anniversary of the railway on Aug 17. [Photo/dbw.cn]

Currently, there are more than 30 pairs of trains running on the railway each day, increasing from 20 pairs in the initial operational phase. Officials said the shortest departure interval is around 20 minutes.

The services are passenger-only and the trains are designed for speeds of around 250 km/h. Thanks to the line, the journey time between Harbin and Qiqihar is now only two hours.

Officials said that the railway plays an important role in driving economic and tourism development in those areas.