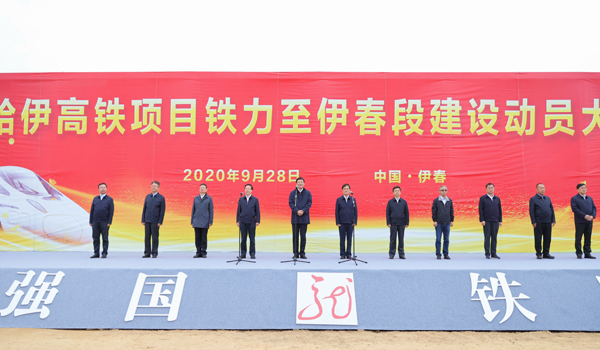 The groundbreaking ceremony for the Harbin-Yichun High-speed Railway is held on Sept 28 in Yichun city, in China’s northernmost Heilongjiang province. [Photo/Heilongjiang Daily]

China’s northernmost Heilongjiang province began construction of the Harbin-Yichun High-speed Railway on Sept 28, according to a report from chinanews.com.

The 300.36-kilometer high-speed railway will connect Heilongjiang’s capital city Harbin to Yichun city in the province.

Starting from Harbin, the route will pass through Bayan county, Suihua city, Qing’an county and Tieli city, before finally arriving at Yichun.

The train service will be passenger-only, and the trains are designed for speeds of around 250 kilometers per hour.

Construction of the high-speed railway will last for three and a half years, and the project has an estimated investment volume of 29.27 billion yuan ($4.26 billion).

Once the route is operational, the journey time between Harbin and Yichun will be shortened from seven hours by train to just 102 minutes.

The high-speed railway will effectively strengthen the economic links between the northern border areas of Heilongjiang province and the developed inland areas, and accelerate the integrated expansion of the Harbin-Changchun megalopolis.

It will also promote a new round of revitalization for the old Northeast China industrial base and create a new engine for regional economic growth.