Since Harbin's winter temperatures can see the mercury hit a frigid -30 degrees Celsius, the trains operating on metro line 2 have adopted industry-leading cold-resistant technology. This tech ensures that the trains' performance remains stable in low-temperature environments and provides passengers with a comfortable cabin temperature.

The metro trains have a designed maximum speed of 80 kilometers per hour. Metro line 2 has a total length of 28.7 kilometers, with 19 underground stations along the line. Of these, eight stations provide transfers for Harbin’s metro lines 1, 3, 4, 5, 6 and 8. 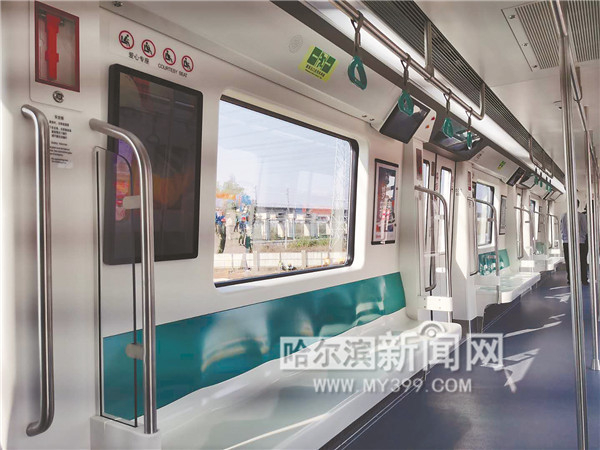 Interior view of the trains specially built for Harbin’s metro line 2. [Photo/MY399.COM]
The first phase of the new metro line 2 has been completed and fine-tuned, and is expected to be put into operation in the second half of 2021.

The metro line will be the backbone of the Harbin rail transit network from the city’s north to southeast, connecting areas along the south and north banks of the Songhua River.