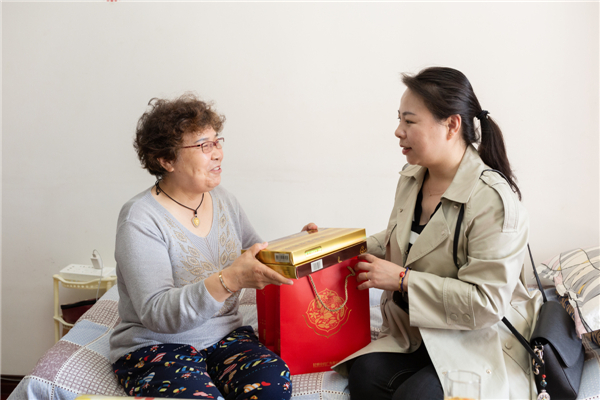 Mei Xueqin is looking forward to a special political birthday celebration that will be held on July 1, the 100th anniversary of the founding of the Communist Party of China.

Mei, 71, a retired civil servant in Harbin, Heilongjiang province, expressed her wish when community workers told her in early April they were promoting an activity among elderly Party members and residents in difficulty in the city's Jianguo subdistrict to "help satisfy your little desires".

"I still remember the day that I joined the Party 50 years ago," she said. "It was on July 1, 1971, when I was working on a farm in Luobei county as a member of 1 million 'educated youths', who had been sent to the countryside to learn from the farmers and helped develop Beidahuang, a fertile but undercultivated region in the north of Heilongjiang.

"I was admitted into the Party due to my industriousness and positive attitude. I felt so honored and proud when I took the oath."

When the community workers asked what her desires were, Mei told them she hoped to have a ceremony to celebrate her 50th anniversary of joining the Party.

"There are 235 residents who have been Party members for more than 50 years in Jianguo," said Wang Hao, its Party secretary." When I got Mei's desire, I realized it would be an activity of great significance for all of them.

"We have planned both online and offline ceremonies for these Party members on July 1. They will recite the oath and celebrate the 100th anniversary of the Party founding together.

"During the process of learning the history of the Party, we are trying to translate the theoretical study into practical achievements. We all believe that the greatest achievements should be solving residents' difficulties and improving their quality of life."

Since March, the subdistrict has organized five meetings of representatives of residents and enterprises, providing them with a platform to express their difficulties and demands.

"Every time we invited around 40 representatives," Wang said. "They listed various difficulties and demands, most of which seemed tiny but were of great importance to their daily life."

The subdistrict launched its "help satisfy your little desires" activity among all its 59,000 residents in early April. Staff workers collected 2,257 wishes and most of them were fulfilled by the middle of May.

Yin Chengsheng's biggest wish was to have a short and clean hairstyle as summer temperatures rise.

However, the 55-year-old became disabled after suffering from polio in his childhood and it is difficult for him to go to a barber shop.

After learning of his desire, the owner of a nearby barber shop decided to provide free haircuts at his home.

"I was so happy when the barber told me he would visit me every month to give me haircut in the future," Yin said. "I will never feel anxious about my terrible hairstyle."

Wang said: "We hope to make all residents feel the warmth of the Party and the love of society. The activity can also help enterprises enhance their sense of social responsibility and mission as well as form good social customs."