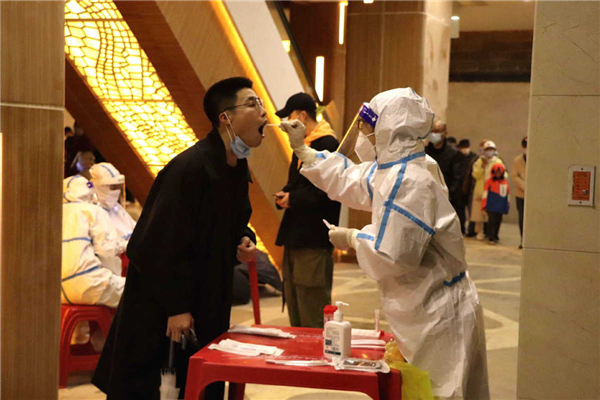 All three cases were found in Bayan county and have been transported to designated hospitals for medical observation and treatment, Ke Yunnan, deputy director of Harbin's health commission, said at a news conference on Tuesday night.

The first case tested positive for the novel coronavirus during a nucleic acid test at the county's Second People's Hospital.

The other two were found during nucleic acid testing among the first case's close contacts, he said. They had returned from the Philippines on Aug 3 and entered the Chinese mainland at Guangzhou Baiyun International Airport. After finishing 14 days of concentrated quarantine in Guangzhou, they returned to Bayan on Aug 18 and had a 14-day quarantine at home.

"Starting from Wednesday, all the kindergartens, primary schools, middle schools and vocational schools will be suspended for one week," Ke said. "Schools will provide online courses during the period."

A total of 1,257 close contacts have been traced and 505 of them have provided samples for nucleic acid testing. Among those, 195 results have been received, all negative.

The city's epidemic prevention and control headquarters released a statement on Tuesday suggesting people suspend unnecessary trips out of the city.

"Residents who have to leave the city for special reasons should present a green health QR code and provide negative nucleic acid test results within 48 hours," said Yin Xifeng, deputy director of Harbin's public security bureau. "Venues for the public such as educational institutions, entertainment facilities and private clinics are suspending their services."

The city also suspended all performances, competitions, forums, exhibitions and other large-scale activities until further notice.

Meanwhile, all scenic spots in the city will be allowed to receive visitors up to 50 percent of their capacities.

All welfare, nursing and mental health institutions have been put under lockdown management.