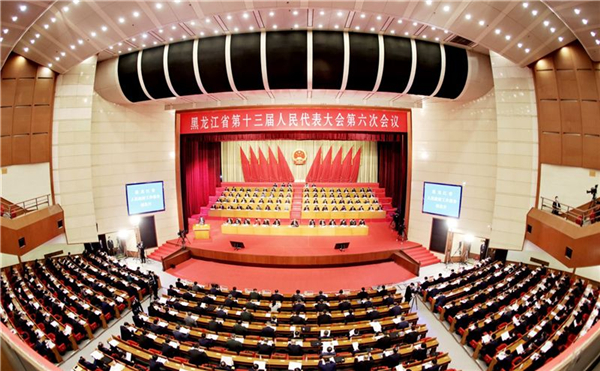 The sixth session of the 13th Heilongjiang Provincial People's Congress kicks off in Harbin on Jan 23. [Photo/Heilongjiang Daily]

The sixth session of the 13th Heilongjiang Provincial People's Congress kicked off on Jan 23 in the city of Harbin, capital of China's northernmost Heilongjiang province.

The congress reportedly outlined major progress made in the previous year and mapped out ambitious plans for the current year.

A government work report was delivered at the conference, which was divided into four parts. This comprised a review of the work for the first year of the 14th Five-Year Plan period (2021-25), the goals and requirements for economic and social development in 2022, the main tasks of the government's work in the current year and scheduled improvements to the government's administrative capabilities.

In 2021, Heilongjiang's GDP increased by 6.1 percent year-on-year. Its industrial added value above a designated size increased 7.3 percent, while its investment in fixed assets rose 6.4 percent.

In 2022, the main targets for the province's economic and social development are as follows:

Heilongjiang's GDP will expand by a projected 5.5 percent, while industrial added value and investment in fixed assets will increase about 8 percent and 10 percent, respectively.

Total retail sales of consumer goods and the value of imports and exports are forecast to increase by 7 percent and more than 10 percent, respectively.

Additionally, the general public budget revenue will increase by 6.5 percent and the income growth of urban and rural residents will be higher than that of the regional GDP.

Finally, the urban unemployment rate will be controlled to around 6 percent.