Ren was born in Harbin, the capital city of Northeast China's Heilongjiang province on June 3, 1997.

In a five-skater final at Beijing's Capital Indoor Stadium, Liu Shaolin Sandor from Hungary fell to cross the finishing line first. However, he was given a yellow card after a review for two penalties in a single race, so Ren claimed the gold.

Ren led in the first four laps and dashed across the line with a time of 1 minute 26.768 seconds.

Ren's teammate Li Wenlong won the silver in 1:29.917 at his first Winter Olympics, followed by Liu's younger brother Liu Shaoang in 1:35.693. The Liu brothers' father is Chinese and their mother is Hungarian.

Another Chinese skater, Wu Dajing, the gold medalist of the men's 500m at the Pyeongchang Winter Games four years ago, finished fourth. 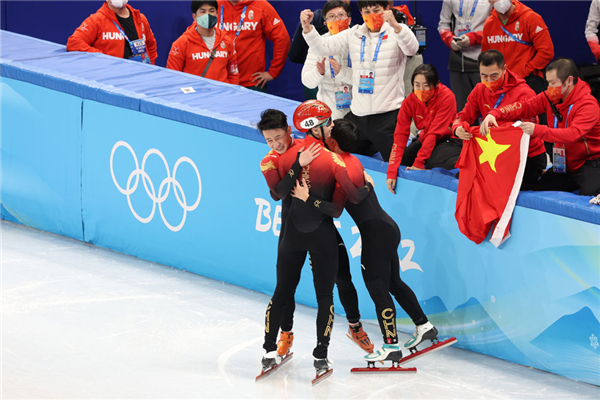 Chinese speed skaters (from left) Ren Ziwei, Wu Dajing and Li Wenlong celebrate after Ren claimed the gold medal and Li the silver in the final of the men's 1,000-meter short track speed skating on Monday at the Beijing 2022 Winter Olympics. [Photo by Feng Yongbin/China Daily]

It was the second gold for Ren at the Beijing Winter Games. He won the mixed team relay with teammates on Saturday, which also was China's first gold in the Games.

"We fought until the last minute in the race, and it was a victory for our team," said the 24-year-old Ren, who didn't qualify for the final at Pyeongchang but won a silver medal there with teammates in the 5,000m relay.

"The second gold here is proof of our efforts in the past four years. The short track speed skating team will never let you down," he added.

Ren, who has three events left, said he needed to adjust his mind to remain calm and ready for the coming events.

"I will try my best in all the events," he said.

Earlier, in the women's 500m final, Arianna Fontana of Italy won the gold, her 10th Winter Olympics medal, with 42.488 seconds. Competing at her fifth Winter Games, she is the most decorated short track speed skater in the Winter Olympics.

China is a traditional powerhouse of short track speed skating. It has won 10 golds in previous Winter Games.