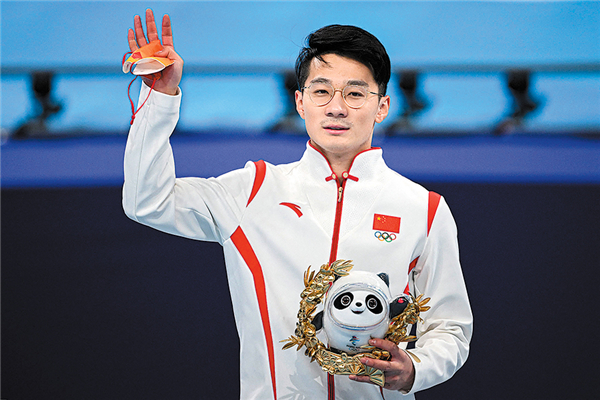 Ren Ziwei. [Photo/China Daily]
After winning two gold medals at the Beijing Winter Olympics, Ren Ziwei has joined China's pantheon of all-time greats in short-track speed skating. And with three events still to come for the 24-year-old, he has his sights set on earning more glory for his country.

"Each generation of our country's short-track speed skating team has been a pioneer for Chinese winter sports," Ren said after winning the men's 1,000m title on Monday, two days after being part of the quartet that won the 2,000m mixed relay.

"We don't make predictions, but will try our very best in all the events."

China is a traditional powerhouse in short-track events, with its Olympic gold-medal haul in the sport now totaling 12.

Northeastern China has been a hotbed of short-track talent through the decades, and Ren is one of the latest stars to emerge from the region.

Born in 1997 in Harbin, the capital of Heilongjiang province, Ren started short-track training at the age of 7.

He first showed his promise on the international stage by claiming 1,500m bronze at the world junior championships in 2014, and was selected by the national team in October of that year.

Two years later at the world juniors, he won the overall title. He is also a four-time medalist at the world championships, winning two silvers in the 5,000m relay, and a silver and bronze in the 500m.

He failed to qualify for an individual final in his Olympic debut at the 2018 Pyeongchang Winter Games, but claimed a 5,000m relay silver with his teammates.

He is currently ranked No 1 in the world for the 1,500m and No 3 for the 500m, and looks primed to lead the Chinese squad to more golds in Beijing.

"My father is a soldier. If I didn't train as an athlete, I would have joined the army too," he said.

"For me, the competition ground is the battlefield in the age of peace. I don't know how to express my love for the country, but I'm ready to contribute all to China. At this time, the best present I can give my motherland is a gold medal. I will try my best to do it."

With the 500m, 1,500m and 5,000m relay still to come for Ren, he is feeling confident of grabbing more medals at the Capital Indoor Stadium.

"Our team won't let you down," he said. "We will prepare solidly for future competitions and strive for a medal－even the gold－in each event. We will try our best."