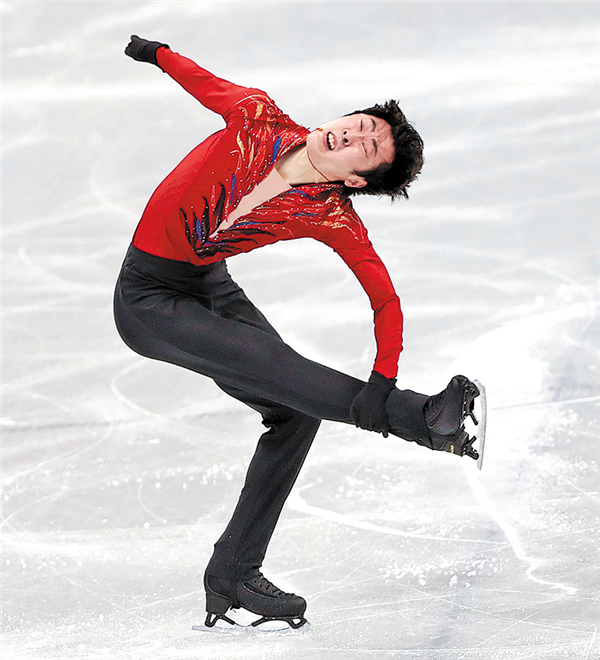 The honor of performing at his home Olympics was all the reward Jin Boyang needed for persevering through the trials and tribulations of a challenging Olympic cycle.

There were no medals for Jin at Beijing 2022, but there was still more than enough to be proud of for the dedicated 24-year-old, who has experienced plenty of ups and downs over the past four years.

Jin finished ninth in the men's singles competition last week with two strong routines, including a season-best score of 179.45 points for his free skate, during which he cleanly landed six of his seven jumps.

"It has been very hard for me over these past four years," said Jin, who was in tears after finishing the free skate at the Capital Indoor Stadium on Thursday.

"In the competitions before, I always did well in the short program, but failed in the free skate, which left me doubting myself－whether I could execute two clean programs or not. This time, I did two good routines, which was incredible."

Four years ago at the Pyeongchang Games, Jin finished fourth, which remains China's best result in the men's singles at the Olympics. But he had long been earmarked for success, having rose to prominence as a prodigious talent.

Jin was inspired to pick up the sport in 2003 by the exploits of China's pairs icons Shen Xue and Zhao Hongbo. His rare jumping ability caught the eye at the 2011 Asian championships when he landed a triple Axel jump－a difficult maneuver for one so young.

He debuted on the junior Grand Prix circuit the following year and won the gold medal thanks to impressive quadruple jumps. At the 2013 Junior Grand Prix final, he again topped the podium.

Although he ultimately finished second behind reigning world champion Javier Fernandez of Spain by 6.18 points, Jin had announced himself on the world stage in sensational fashion.

Bronze medals at the 2016 and 2017 world championships saw Jin head to the 2018 Olympics as a strong medal contender.

Hopes were high Jin would be challenging for the podium on home ice at Beijing 2022, but illness and the COVID-19 pandemic, which halted his training for a period, disrupted his preparations.

At the 2021 world championships, Jin finished a lowly 22nd among a field of 24 skaters.

Last October, he recovered from an appendicitis operation and returned to the ice to win bronze at the 2021 Asian Open Figure Skating Trophy. He finished seventh at the Italian Grand Prix the following month, despite having topped the short program.

In an all-in attempt to rediscover his top form, Jin has taken just one week off the ice over the past two years. And he feels all the hard work has been worth it in Beijing.

"I've conquered myself, because over the past four years I have doubted my ability at times. All my efforts have paid off," he said after finishing his competition at the Capital Indoor Stadium.

"I'm very happy to put on such good routines on home ice, showing the Chinese fighting spirit. I have really enjoyed these Olympics and this is the best moment of my life."

And fans will be pleased to know, Jin is planning to compete at the Milan-Cortina Olympics in 2026.

"I am expecting my third Olympics. I will keep fighting for my dream with passion," he said.

"I will definitely carry on. It means so much to me, but I also love to share figure skating with the audience and hopefully attract more people to winter sports."