The  Snow Kids sculpture is on display in Beijing's Winter Olympics Park. [Photo provided to chinadaily.com.cn]

When Liu Yang saw his sculpture Snow Kids in Beijing's Winter Olympics Park, he said he felt it was a "great honor".

In late January, a group of 15 sculptures created by artists from around the world, including Snow Kids, went on public display to welcome the 2022 Beijing Winter Olympics and Paralympics.

Snow Kids was the first to be installed in early November in the park, located in Beijing's Shijingshan district.

The 5-meter-tall sculpture is made of more than 100 pieces of cut and welded stainless steel.

Over the past decade, Liu, 50 — a sculptor born in Harbin, Heilongjiang province — together with his wife, Liu Qin, has created around 80 sculptures in 34 countries worldwide, including Russia, France, Costa Rica and Tunisia. 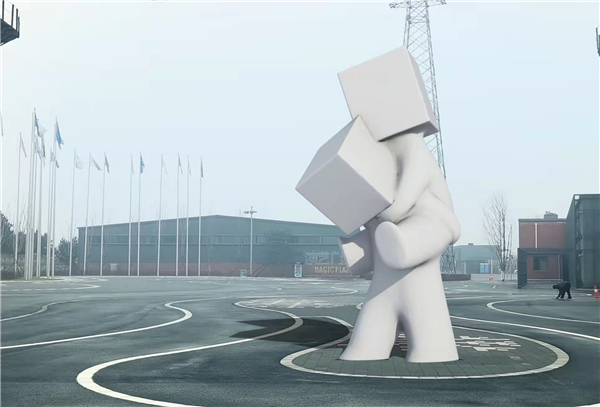 The  Snow Kids sculpture is on display in Beijing's Winter Olympics Park. [Photo provided to chinadaily.com.cn]

"When we got the news in July 2020 that the Beijing Winter Olympics Organizing Committee had called for submissions of public sculptures for the Winter Olympics and Paralympics from around the world, we decided to try to qualify," he said. "We spent several months designing the sculpture and at the beginning of 2021 we received notification that our work had been selected from among 1,600 designs."

The idea came from the couple's 5-year-old daughter, he said.

"In the winter of 2005, when we were making a snowman outside, she asked me if we could keep the snowman until spring and summer because she wanted it to enjoy flowers and rain," Liu said.

"We all knew that was an innocent thought of a child, but I also felt it was a pity that the beautiful ice and snow sculptures couldn't be kept permanently. The Snow Kids became a perfect combination when we finished the design, as it also helped my daughter fulfill her childhood dream."

Snow Kids illustrates the "greater unity" mentioned in the Olympic motto and conveys the concept of "friendship first, competition second", he said. "It is the ambassador of the Olympic spirit as well as a messenger of Chinese culture.

"In Liu's mind, there are many similarities between sculptures and the Olympic spirit.

"They are all good bridges of culture and can help promote unity among different countries around the world," he said. "I left my sculptures in different places, bringing Chinese culture and spirit to those who went to see them."