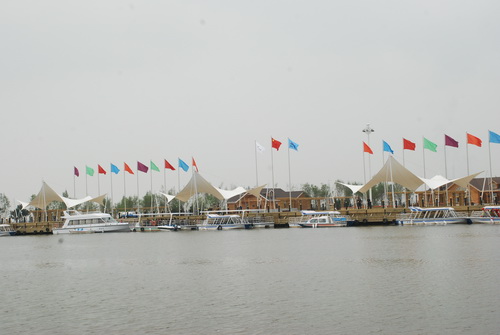 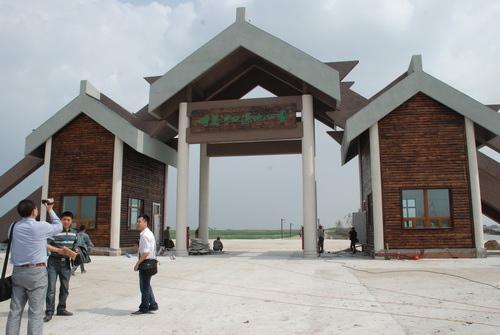 Hulan River Mouth Wetland Park in Hulan district, Harbin city, Heilongjiang province, is the largest park of its kind in a in a Chinese city.

A 1.8-kilometer-long stone avenue called Cattail Avenue stretches from the gate to the center of the park, and visitors can enjoy the park by taking a boat or an electric car.

a sightseeing plank road paved with logs and stretches 2000 meters, connecting the scenic shoals and islands, and is a good locatin to see cattails and birds  in the summer.

The open-air Water Park on Moon Shoal, covering an area of about 6,000 square meters, is under construction. It is set to be the largest of Heilongjiang province, and will debut this summer. This year is the Year of Chinese Tourism in Russia, and Russian tourists are expected to enjoy these attractions.
The central pool of 4,000 square meters can accommodate hundreds of people, and the two 2,000-square-meter side pools are especially designed for children, who can play on water slides and other recreational facilities there.

The park will include a 2,000-square-meter Naughty Fort for children, Beach Motorcycle Court with a runway of 800 meters, a Beach Archery Club and Wild Fishing Platform, and the tourist center has bought 158 boats to form the largest wetland fleet in Harbin.

A new route is expected to open from the Jiuzhan Pier in Daoli district to the wetland area  this summer. After the Hulan Bridge is finished, a car ride from downtown Harbin to the wetland will take about half an hour, and the distance will be reducted to 20 kilometers.

After a dam was builtat Dadingzi Mountain in 2006, the water level of Songhua River in the Harbin area increased by 6 meters. Thus, when Hulan River fed into Songhua River, a wetland of 38.5 square kilometers was formed and became known as the  Hulan River Mouth Wetland Park.